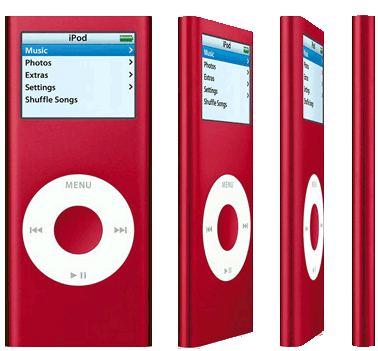 If there's anyone better than U2 frontman Bono at playing both sides of the fence in the OS wars, we haven't met them yet. One day this guy is hanging out with Bill Gates and sleeping over at his cushy pad, and the next day he's convincing Steve Jobs to release a special (non-U2) iPod and donate 5% of the proceeds to his HIV / AIDS charity. Well, at least that's the word from AppleInsider, who's claiming that the rocker was at the Apple Store in Chicago today filming a promo spot with Oprah Winfrey to prepare for the device's debut on her show tomorrow. This iPod nano Red (artist's rendition pictured above), as it's being called, will supposedly be yet another addition to the rainbow of 4GB 'Pods first unveiled at last month's "Showtime" event, but unlike the U2 models, this one will cost the same $200 as its multi-colored brethren. Each DAP sold will reportedly net PROJECT RED $10, which will then be re-donated to The Global Fund to help African women and children afflicted with the deadly disease. Get a Mac? Get a PC? An iPod? A Zune? When you're Bono, you don't have to decide.

[Thanks, Tom]
In this article: apple, apple store, AppleStore, bono, charity, ipod nano, ipod nano red, IpodNano, IpodNanoRed, oprah winfrey, OprahWinfrey, portable audio, portableaudio, project red, ProjectRed, rumors, u2
All products recommended by Engadget are selected by our editorial team, independent of our parent company. Some of our stories include affiliate links. If you buy something through one of these links, we may earn an affiliate commission.
Share
Tweet
Share