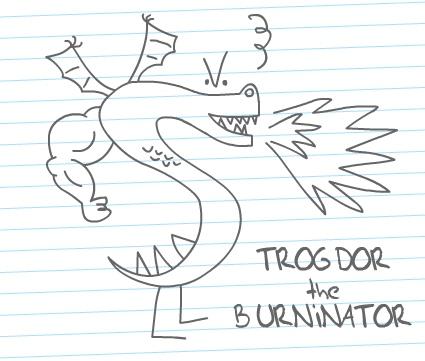 No sooner did we let y'all know that DethKlok, the fictional band in Adult Swim's Metalocalypse, would be making an appearance as an unlockable bonus track in Guitar Hero II, than we found out the entire bonus song list ... 24 tracks in total! It appears certain Wal-Marts, depending on how many copies of Guitar Hero they sold, have demo kiosks with the sequel set up and ready to rock! Twenty-four low-res pictures later, we know the entire list of unlockable songs. Combine those with the forty tracks already confirmed, and you've got yourself quite the rock feast.

A notable addition: Popular Flash cartoon -- and Nintendo Tag Team Wrestling alum -- Strong Bad's metal/dragon opus Trogdor (The Burninator). Check out the video -- and the entire 64-track setlist -- after the break, then play the Trogdor game, to hone up on your burninating.

5. Return of the Shred
Rage Against the Machine - Killing in the Name Of
Primus - John the Fisherman
Sword - Freya
Thin Lizzy - Bad Reputation
Aerosmith - Last Child

In this article: Guitar Hero, Guitar Hero II, GuitarHero, GuitarHeroIi, Harmonix, PS2, Red Octane, RedOctane, Strongbad, Trogdor, Xbox-360
All products recommended by Engadget are selected by our editorial team, independent of our parent company. Some of our stories include affiliate links. If you buy something through one of these links, we may earn an affiliate commission.
Share
Tweet
Share