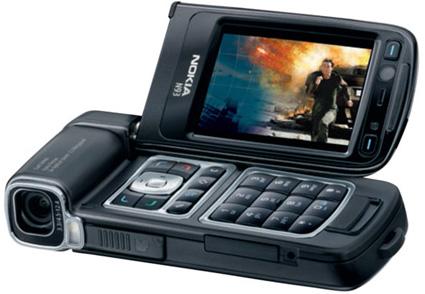 If you're not already streaming movies to your less-than-ideal mobile display, or still toting that awkward Sharp 905SH to pick up Japanese TV broadcasts, Vodafone has an offer sure to make anyone any remaining Tom Cruise fans happy. Reportedly part of a holiday promotion to get more Nokia N93's in the hands of consumers, Vodafone will be including "a copy of Mission: Impossible III" on a 512MB miniSD card with the purchase of the N93 (and presumably a lengthy contract). The film will supposedly "run at 25fps" and support "rewind, fast forward, stop and resume, just like a proper DVD." The most intriguing bit, however, isn't the fact that a free half-gigabyte miniSD card sounds entirely more appealing than a played-out action film, but "you can also offload the flick onto your PC, and use the card for your own movies afterwards." Regardless of who seemingly gave Vodafone the thumbs-up to deliver the major motion picture sans DRM, we're just waiting in tense anticipation to see this unhampered goodness hit elsewhere.
In this article: film, mission impossible, MissionImpossible, mobile, movie, multimedia, n93, nokia, promotion, vodaphone
All products recommended by Engadget are selected by our editorial team, independent of our parent company. Some of our stories include affiliate links. If you buy something through one of these links, we may earn an affiliate commission.
Share
Tweet
Share