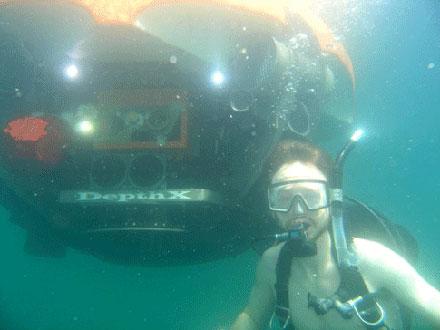 As Popular Science reports, inventor/spelunker Bill Stone's DepthX robot submarine recently underwent its first successful test in Mexico's La Pilita underwater cave, which Stone hopes is only the first step on the bot's way to exploring Jupiter's ice-covered moon, Europa. After a slight delay with some suspicious border guards, the robot quickly got to work on its initial field test, diving some 300 feet down into the cave system, collecting samples, capturing images, and building a 3D map of the area. As the video after the break shows, the robot is definitely built to impress, with some decidedly sci-fi sounding sound effects adding the perfect final touch. According to Popular Science, DepthX will undergo another field test next month, to be followed by a considerably bigger challenge in May, when it'll dive more than 1,000 feet into the Zacaton, the world's deepest sinkhole.

In this article: bill stone, BillStone, bot, depthx, robot, robot submarine, RobotSubmarine, sub, submarine
All products recommended by Engadget are selected by our editorial team, independent of our parent company. Some of our stories include affiliate links. If you buy something through one of these links, we may earn an affiliate commission.
Share
Tweet
Share