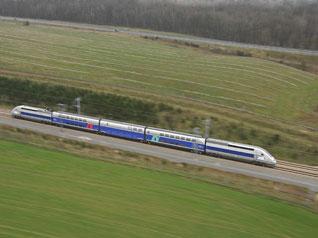 While the majority of world speed records we cover involve things like transistors, data transmission, and even the occasional text messaging attempt, we're not ones to pass up a good old fashion land speed record, which France's Alstom Technologies thankfully provided today. After months of working up to it, the company finally sent its V150 passenger train screaming through the French countryside, ultimately topping out at a breakneck speed of 574.8 kilometers per hour, or about 357 mph, easily besting the previous rail speed record of 320 mph. While it'll no doubt only make you jealous of not being on board (or at least nearby), you can check out a video of the record-setting attempt at the link below.

In this article: rail speed record, RailSpeedRecord, speed record, SpeedRecord, train, world speed record, WorldSpeedRecord
All products recommended by Engadget are selected by our editorial team, independent of our parent company. Some of our stories include affiliate links. If you buy something through one of these links, we may earn an affiliate commission.
Share
Tweet
Share