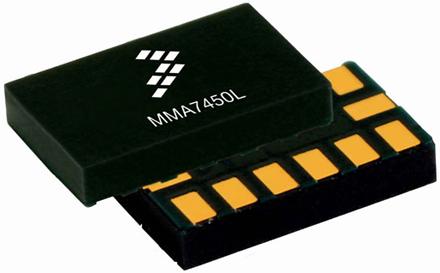 Make no mistake about it, accelerometers have certainly been all the rage of late, and Freescale Semiconductor isn't missing its chance to cash in on the bonanza. The firm has recently announced what it calls the "world's thinnest 3-axis digital-output accelerometer" for use in motion-based user interfaces, and it checks in at around "77-percent smaller" than existing offerings. The MMA7450L is available in a 0.8-millimeter thin plastic land grid array, eliminates the need for a dedicated analog-to-digital converter, includes three g-select sensitivities, and is almost ready to rock in tomorrow's most diminutive controllers, handhelds, and mobile handsets. Currently, only major manufacturers are getting their hands around samples, but general availability of the $2.66 device (when you order 10,000, that is) is expected by Q3 of this year.

[Via TGDaily]
In this article: 3-axis, 3-axis Accelerometer, 3-axisAccelerometer, Accelerometer, freescale, interface, land grid array, LandGridArray, LGA, mcu, mems, MMA7450L, motion, motion sensitive, MotionSensitive, spi, thin, world record, world's thinnest, World'sThinnest, WorldRecord
All products recommended by Engadget are selected by our editorial team, independent of our parent company. Some of our stories include affiliate links. If you buy something through one of these links, we may earn an affiliate commission.
Share
Tweet
Share