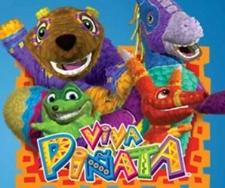 According to Piñata Island, the source for all things Viva Piñata, a demo for Viva Piñata Party Animals should be on the Marketplace today. Actually, according to them, the demo should be available right now. Considering that it isn't available right now, we're guessing one of two things: A) Piñata Island got some bum info or B) something has gone awry. Seeing as Piñata Island has some close friends in the Viva Piñata circle, we're betting on column B. Here's hoping we'll see it sooner rather than later. If you're unfamiliar with the title, check out our impressions of the E3 demo (which is likely the same demo being prepared for XBLM).

In this article: krome-studios, kromestudios, mgs, microsoft-game-studios, microsoftgamestudios, rare, viva-pinata, viva-pinata-party-animals, xblm
All products recommended by Engadget are selected by our editorial team, independent of our parent company. Some of our stories include affiliate links. If you buy something through one of these links, we may earn an affiliate commission.
Share
Tweet
Share