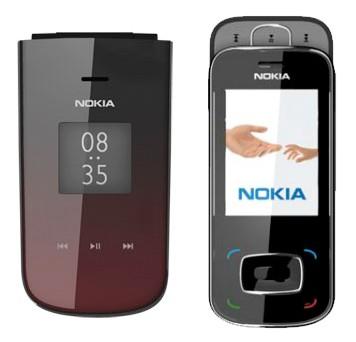 Who would've thought that Nokia's first Series 40 dual slider would be for CDMA networks? Well, not so fast -- these two aren't exactly Series 40, it seems. Nokia hasn't announced either the 3608 flip or 8208 dual slider officially, but official specs and pictures have popped up on an Espoo-owned domain that reveal the China-bound handsets to operate on CDMA 800 / 1900, and in the case of the 8208, we can say with certainty that there's EV-DO Rev. A on board. Anyway, as we were saying, Nokia lists both as having "Series 40 Nokia like UIs," with "like" being the key word there; we suspect these are either still being manufactured for Nokia by a third party, Series 40 can't rock CDMA in its current incarnation, or a little bit of both. Trust us, though, Nokia -- that doesn't mean you shouldn't take these cute little guys global.

[Via MobileBurn, here and here]

Read - Nokia 3608
Read - Nokia 8208
In this article: 3608, 8208, cdma, china, dual slider, DualSlider, ev do, evdo, flip, mobile, nokia, slider
All products recommended by Engadget are selected by our editorial team, independent of our parent company. Some of our stories include affiliate links. If you buy something through one of these links, we may earn an affiliate commission.
Share
Tweet
Share