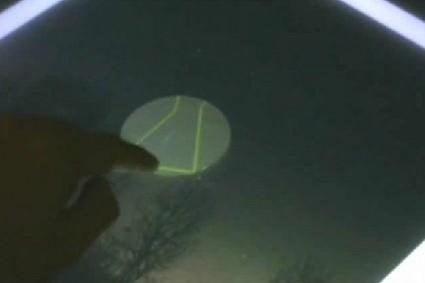 Microsoft's Surface may be hard at work helping the liberal media steal the election (we kid, we kid), but other than acting as props in stores or random promotional videos, the device hasn't exactly created a market for itself. But that's not stopping MS from introducing the next generation: SecondLight. It takes the tabletop, multi-touch display concept and adds the ability to project images into the air thanks to a liquid crystal screen timed to be transparent on alternate frames, enabling a projector below to beam an image right through it. Your eye doesn't notice unless you hold something opaque up to scatter the light (like tracing paper, for instance), meaning the device can show a picture of the night sky on the surface while highlighting the constellations on paper. The must-see video below shows how the thing can also track objects above the glass, turning a sheet held aloft into a second multi-touch display. Like the Surface, practical applications for this seem somewhat limited -- but since when have you cared about practicality?

In this article: microsoft, microsoft secondlight, microsoft surface, MicrosoftSecondlight, MicrosoftSurface, secondlight, surface
All products recommended by Engadget are selected by our editorial team, independent of our parent company. Some of our stories include affiliate links. If you buy something through one of these links, we may earn an affiliate commission.
Share
Tweet
Share