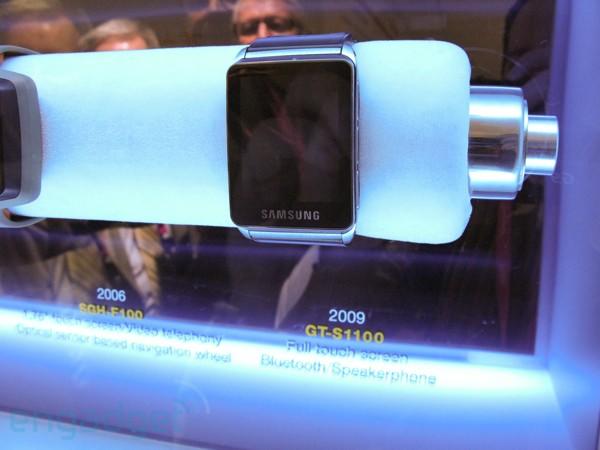 Remember what LG did at CES last year? Those crafty sons of guns showed off a shockingly decent-looking concept watch phone that ended up seeing a production announcement exactly one year later. Not to be outdone by its crosstown rival, Samsung came to MWC this year with a timeline showing its nearly decade-long history of designing and selling watch phones -- and interestingly, the rightmost entry in the timeline was dated "2009." We couldn't get any solid information on the GT-S1100, but like LG's GD910, the device features a full touchscreen, Bluetooth, and a speakerphone (probably a good thing for a phone you can't put up to your ear without getting a lot of odd looks). 'Course, in all likelihood, this is just another chapter in the book of Samsung heartbreak -- it'll either never see production or get released by precisely one carrier in precisely one country, then promptly fade into oblivion -- but it's looking awfully production-friendly. Same time, same place next year, Sammy -- just make sure you guys bring something more than a dummy behind a glass case this time, k?

5
In this article: features, gt-s1100, mwc, mwc 09, mwc 2009, Mwc09, Mwc2009, samsung, watch, wristwatch
All products recommended by Engadget are selected by our editorial team, independent of our parent company. Some of our stories include affiliate links. If you buy something through one of these links, we may earn an affiliate commission.
Share
Tweet
Share