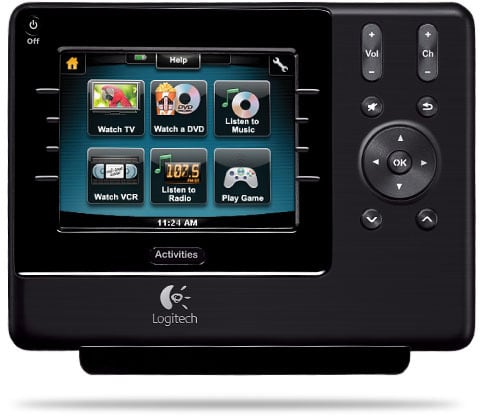 Like a skeleton in the closet or a beating heart in the floorboards, many home theater enthusiasts are cursed by a barrage of remote controls, each with different shapes, sizes, and battery demands. Cheap multi-device programmable remotes help, but Logitech's Harmony line has for years been something of a savior, elegantly hiding all your devices behind simple activities like "Watch TV" or "Play a CD." The Harmony 1100 is the latest to join the lineup, and is in many ways the most elegant to look at and to hold. Sadly, though, it's far from the most intuitive to use, and so is not exactly our favorite.

How would you rate the Harmony 1100?
We want to hear what you think. Post a quick review now to join the conversation!
Write a review

The 1100 has a simple, clean design that combines six buttons, two rockers, and a directional pad along with a 3.5-inch QVGA color touchscreen situated over to the left. There's a large indentation on the slightly rubberized back that makes it easy to pick up and hold one handed, with the buttons on the right falling under your thumb. However, the majority of the functionality available here is accessed through that screen on the left, and that's really the downfall of this remote.

The screen itself is bright and colorful, if a bit grainy, but its position means you're stuck using a second hand to use most functions. Whether you're selecting an activity to perform, punching in a television channel, or even fast-forwarding through a commercial, you'll need extra fingers and eyes on that panel. After a few days' usage you'll start to be able to do some functions without a glance, but even then you'll spend far more time staring at it than you'd like -- despite its nice looks.

Setting up an advanced remote like this is always somewhat painful, and Harmony's wizard-heavy interface makes that process take longer than you'd think it should. Exacerbating that problem is an inability to import your devices and activities from most older remotes. If you have something like a 510 that you've already spent hours programming you'll do it all over again from scratch. We could understand having to customize the 1100's display, but there's no reason for having to manually add and tweak all your devices and activities anew. Inexplicably Logitech has also chosen to remove the ability to create sequences, which were very useful macros of multiple commands.

However, despite being slow and occasionally lacking, the software is generally simple yet powerful, with a database of thousands and thousands of devices that should cover everything from your television to your space heater. If you have a one-off device it doesn't recognize it can learn those commands, too. There's also RF, so with an (optional $100) receiver you can use it anywhere in your house, but sadly does not sport Bluetooth functionality, so controlling your PS3 is out without something like Nyko's BluWave. Granted, there aren't yet many devices that allow Bluetooth for control, but at $500 it doesn't seem like too much to ask for.

The 1100 works like any of the earlier Harmony entries: pick an activity and it turns on all the devices you need, sets their inputs accordingly, and displays a set of commands specific to those devices. The remote is light, what buttons there are feel quite responsive, and while the resistive touch-screen isn't the most sensitive we've ever smudged it does its job. However, since it is resistive it will pick up any pressure, meaning if you set it face-down on the couch you could wind up inadvertently turning off all the lights -- if you have IR-controlled lights.

A motion sensor turns on the screen when you pick it up, but it also pops on if you happen to bump it and sometimes even if someone just walks by. This can be distracting if you're in a dark room watching one of those movies that rockets off on a tangent the second your eyes leave the screen. Backlight timing can be adjusted in the settings, but even turned down the battery only survived about a day of usage in our tests. Granted, that was heavy usage, with a lot of programming and reprogramming in the mix, so your average person should get at least a few days out of it. That's still hardly impressive, so you'll need to put that docking station recharger somewhere well in reach.

The 1100 definitely has the look and feel of a solid piece of kit; one of those devices you want to pick up and turn over in your hand just for the sake of feeling it -- as it should for about $500. But, when it comes to the actual business of controlling your devices, it's no better than the far flimsier feeling and far cheaper 500-series remotes, and many would find its screen-focused design even worse.

Adding custom images to buttons and laying out things how you like is great, but if you're the kind of person who just wants your remote to be perfectly intuitive and work as you expect without even having to look at it, the 1100 is not for you. On the other hand, if you like exciting things that cost a lot of money and make people say "Ooh, what's that?" you'd better find that credit card.
In this article: feature, featured, features, harmony, harmony 1100, Harmony1100, logitech, logitech harmony, logitech harmony 1100, LogitechHarmony, LogitechHarmony1100, remote, review
All products recommended by Engadget are selected by our editorial team, independent of our parent company. Some of our stories include affiliate links. If you buy something through one of these links, we may earn an affiliate commission.
Share
Tweet
Share