Adobe releases trio of Photoshop Touch Applications for the iPad 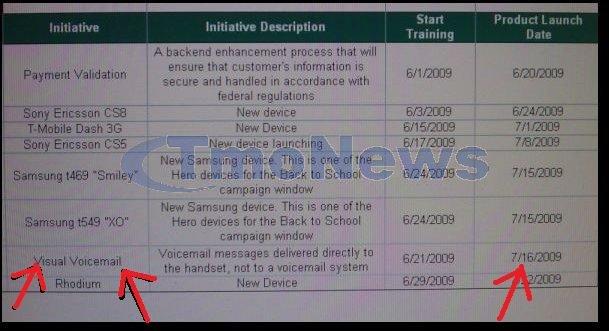 Newly-leaked projected training and launch dates on T-Mobile are revealing a treasure trove of goodies for the summer months, not the least of which seems to be a visual voicemail system -- a trend already validated by AT&T's and Verizon's past and future launches -- expected on July 16, though it's not clear what devices are lined up to get it. On the hardware front, we're getting some much-needed validation on dates we've already heard: we've got the Dash 3G (alias Snap, alias S522) in the mix for July 1, the 8 megapixel Sony Ericsson CS8 slider for June 24 (and its kid brother, the CS5, for July 8), and the HTC Rhodium / Touch Pro2 for July 22. We've also got a couple "hero" Samsungs listed in here, though we're fairly certain they're not Android devices -- Houdini, where are you?
In this article: cs5, cs8, dash 3g, Dash3g, edge, ericsson, gsm, hsdpa, htc, mobile, rhodiu, s522, samsung, slider, snap, sony, sony ericsson, SonyEricsson, t mobile, t-mobile, t469, t549, tmobile, touch pro2, TouchPro2, umts, visual voicemail, VisualVoicemail, vvm, windows mobile, WindowsMobile, winmo
All products recommended by Engadget are selected by our editorial team, independent of our parent company. Some of our stories include affiliate links. If you buy something through one of these links, we may earn an affiliate commission.
Share
Tweet
Share