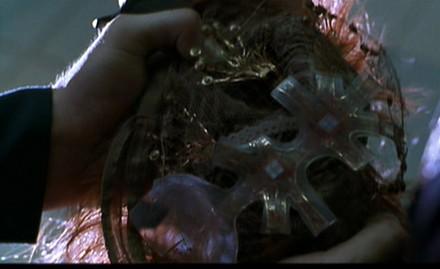 On our last episode of Movie Gadget Friday, we rode around the robotics-dependent world of Runaway. Traversing from robots-gone-wrong to "wire-tripping"-technology-junkies, this week jacks-in to the cyberpunk streets of LA in Strange Days. While lacking in computer gadgetry, there is no shortage of leather pants, grunge metal, huge cell phones and random rioting in this 1995 film. Keeping true to the times, we can't get over how even the murderer commits crimes while managing to sport a fanny pack.

Short for Super-conducting Quantum Interference Device, the SQUID receptor rig consists of a two-part system: a lightweight, flexible mesh of electrodes and a recorder. The technology had originally been developed for the feds to replace body wires, but has since leaked onto the black market. The SQUID acts as a magnetic field measurement tool on a micro level. By placing the electrodes over your head and activating the recorder, your first-person audio-visual-sensory experience is recorded wirelessly, direct from the cerebral cortex onto a TDK 60-minute MiniDisc. The rig can also be hacked using a signal splitter and simstim attachment - allowing someone else to experience your experience in real-time. Optional accessories for the rig include a fanny pack for closely storing the recorder and various wigs for concealing your otherwise obvious surveillance of others.

Unfortunately, there appears to be no way to directly upload these recordings to the net, leaving room for inefficient, in-person, illegal "playback" dealings of MiniDiscs similar to buying and selling drugs. From sex to committing crimes, clients to the self-proclaimed "switchboard of souls" dealers are able to jack-in to a variety of illicit activities without leaving their home. More after the break.

This bulky, retrofitted Sony MiniDisc player acts as a Playback Deck for the 60-minute cerebral cortex recordings. Linked up to a simulated-stimulation (simstim) attachment via short-range wireless technology, users affix the translucent appendage over their head and hit play to receive a sensory overload of someone else's experience. The simstim attachment delivers a high adrenaline adventure to your audio-visual-sensory receptors, so strong that keeping your eyes open causes users to see double.

While the Playback Deck is rather basic in its play, stop, fast-forward and rewind functionality, hackers have been able to insert amplifiers inline in order to boost the sensory signal. This hack is not recommended for tinkerers at home, as amplifying SQUID recordings causes frontal lobe failure, leaving you in an acid-trip-of-a-coma for the rest of your life. Beyond having a surround-sound system embedded in your head, we question if the future of this gadget will lead to cyborg-like notions of achieving collective thought.

Connected to a home phone and television, this control pad serves as a paired down dashboard for busy professionals. The device ships with five services: voicemail, weather, TV guide, local news and international news. Essentially a less-than-glorified remote control, the gadget retains one unique feature: real-time answering machine transcribing. We're unsure of a use case that needs to have voicemail transcribed word-by-word in real-time (guessing people are typically not home to see its processing speed in action), but this definitely led the way for visual voicemail to come.


Ariel Waldman is a digital anthropologist and the founder of Spacehack.org, a directory of ways to participate in space exploration.
In this article: 1995, column, columns, cyberpunk, feature, featured, features, minidisc, movie gadget friday, MovieGadgetFriday, simstim, sony, squid, strange days, StrangeDays, tdk
All products recommended by Engadget are selected by our editorial team, independent of our parent company. Some of our stories include affiliate links. If you buy something through one of these links, we may earn an affiliate commission.
Share
Tweet
Share