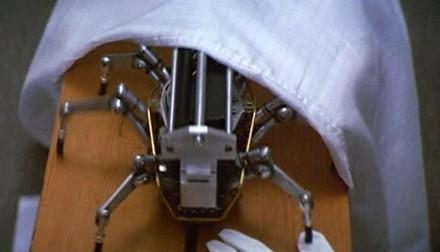 Previously on Movie Gadget Friday, we tapped into the near dystopian future of fear in Brazil. Keeping on that 1980's near-future vibe (but with a slightly more sentient twist), this week we check out Michael Crichton's Runaway, starring Tom Selleck, Gene Simmons, Cynthia Rhodes and Kirstie Alley. Filled with circuitry and hardwired chips, the movie reinforces wholesome family values by featuring warranty voids as the gateway hack to murder.

Measuring in around the size of a human head, these six-legged, spider-like, autonomous robots are mechanical in movement but shockingly precise in killing prey. The autonomous insects have the ability to propel themselves up to seven feet in the air, allowing for attacks on unsuspecting victims. Dual-functioning, the legs are able to crawl and grasp a multitude of surfaces, albeit awkwardly and rather slowly. After programming targets into a mainframe, the robots are able to identify and kill victims by injecting them with acid via a probe before short circuiting and eventually exploding into a ball of flames. Sadly, the robots lack any sort of remote control, making human errors in target-programming unable to be edited.

Essentially deadly tracking devices, the smart bullet and lock-on follow unique signatures at high speeds with an amazing amount of accuracy. Lacking sentient nature, the Lock-On seeks out planted "bugs". Used in high traffic situations, Lock-Ons can easily glide on smooth surfaces and navigate through obstacles at high speeds (60 MPH+) before exploding at the site of the target bug. The smart bullet acts as a mini-missile, requiring use of a custom-made gun. The bullets seek out the unique heat patterns of individuals in order to identify the recipient of their smoldering and massively fatal bullet wound. The bullets consist of a solid propellant and different valves for direction control (including dodging objects/corners and turning around). We're uncertain if the user interface for programming targets lies within the gun or if the bullets are acutely sentient in their ability to analyze the gunman's desired victims, as we were unable to observe any need for punching buttons or flipping switches in between rapid fire.

Ranging from Type 9-12 basic house cleaners to Series 12 full-on nannies, domestic multi-purpose robots appear to dominate households in the world of Runaway. We're guessing the design decision to not make any of the robots taller than four feet was deliberate so as to demand hierarchy in the human-to-robot relationship. The domestic robots can come equipped to cook, take messages, carry on conversation and monitor electronic activity such as remote power surges. Similar models such as the 577 are used in offices, and have the unique capacity to taser misbehaving employees at levels ranging from shock to stun. The dials-and-buttons controls are left exposed for easy day-to-day programming, but most also possess the ability to accept voice codes for operation. Seemingly without an open API, modifications to these domestic robots typically result in fatal situations rather than improved capabilities.


Ariel Waldman is a digital anthropologist and the founder of Spacehack.org, a directory of ways to participate in space exploration.
In this article: 1980s, 1984, bullet, circuits, features, gene simmons, GeneSimmons, kirstie alley, KirstieAlley, michael crichton, MichaelCrichton, movie gadget friday, MovieGadgetFriday, robot, robots, runaway, tom selleck, TomSelleck
All products recommended by Engadget are selected by our editorial team, independent of our parent company. Some of our stories include affiliate links. If you buy something through one of these links, we may earn an affiliate commission.
Share
Tweet
Share