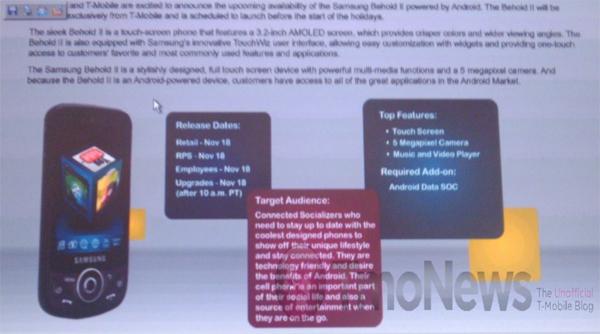 The CLIQ might be getting the lion's share of the Android spotlight on T-Mobile at the moment, but it's not the only Google-equipped gear in the carrier's pipeline -- the other big news there would be the Behold II from Samsung, a logical successor to the myTouch 3G with an AMOLED display and 5 megapixel cam. Seems like there's a little bit of a wait left, because TmoNews has scored some launch documentation suggesting that they're planning on a November 18 to get it pushed out to the public (and let's be honest, we'd all rather have that positively sick nasty myTouch Fender Limited Edition anyhow). Moving our attention downmarket, there's apparently a self-branded (read: a manufacturer you've never heard of) full touch device called the "Tap" that'll be hitting on the 11th of next month, likely slotting in below the Highlight in the carrier's range. No offense, there, Tap, but we're going to have to take a Behold II over ya.
In this article: android, behold ii, BeholdIi, edge, gsm, hsdpa, mobile, others, rumor, samsung, t-mobile, tap, umts
All products recommended by Engadget are selected by our editorial team, independent of our parent company. Some of our stories include affiliate links. If you buy something through one of these links, we may earn an affiliate commission.
Share
Tweet
Share