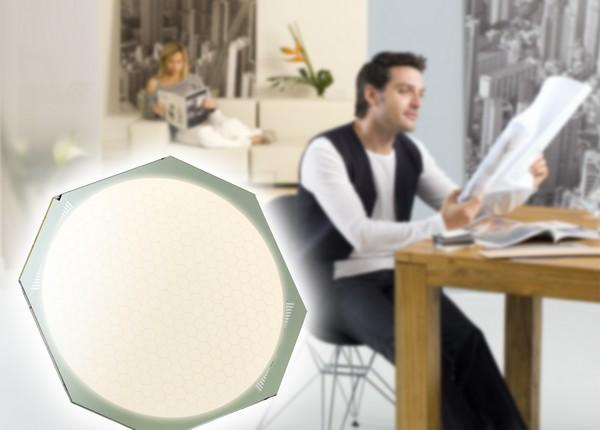 The days of OLED wallpaper are still some years away, but you can finally start thinking about replacing those tired light fixtures with something a little more two-dimensional. After testing the waters with its Early Future lamp and then boosting efficiency of its product, OSRAM is announcing availability of Orbeos OLED panels for general consumption. The discs are 80mm wide, only 2.1mm thick, and emit light at a temperature of 2,800K, meaning they're much closer to an average incandescent than those awful CFLs. They're not as efficient, though, managing just 25 lumens per watt compared to your average CFL's 60 - 72. Still, they're about twice as thrifty as traditional bulb tech and can be configured in a variety of interesting ways (shown after the break), but since the company isn't saying just how much any of those configurations will cost we have to figure it's still going to be awhile before you're mounting these under your cabinets.

In this article: cfl, household lighting, HouseholdLighting, incandescent, lighting, oled, oled lighting, oled panel, OledLighting, OledPanel, orbeos, osram, osram orbeos, OsramOrbeos
All products recommended by Engadget are selected by our editorial team, independent of our parent company. Some of our stories include affiliate links. If you buy something through one of these links, we may earn an affiliate commission.
Share
Tweet
Share