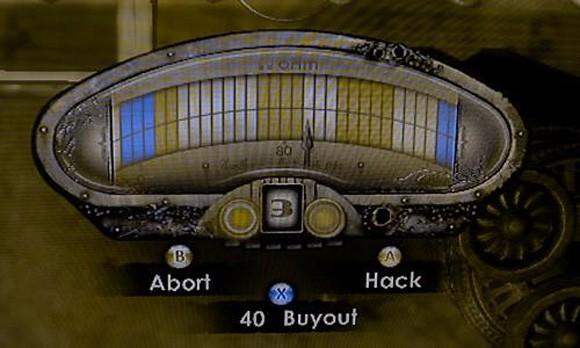 [Image credit: Negative Gamer]
Allow me to break from the usual third-person writing style we employ at Joystiq to address my personal stake in writing this post -- I'm part of the approximately 10 percent of human males with colorblindness. I had to return Super Puzzle Fighter for GBA and turn on the symbols in Hexic (the price I pay for the love of puzzle games). Like Russ at MTV Multiplayer, I (quite likely) have the most common form of colorblindness: Deuteranopia.

Personal info aside, Negative Gamer put together a bit of an analysis of BioShock 2's hacking system -- a system which applies color matching to various rewards/punishments (green = hack, blue = reward, red = alarm, white = electric shock) and one which could be problematic for those suffering from colorblindnesses many forms. The piece takes a program called "Colour Contrast Analyser" (yes, it's a British-born application) and runs an example image of the hacking program through it, pointing out how the colors would appear to people with a variety of types of colorblindness -- the image you see above is but one example.

So! If you've ever wondered what it's like to deal with the frustration of being colorblind and not being able to play a game because of it, now's your big chance. If you want to start a petition to "fix" the situation like these folks did for Modern Warfare 2, I'd really appreciate it.

[Via MTV Multiplayer]
In this article: bioshock, bioshock-2, colorblind, colorblindness, deuteranopia, hacking, hexic, Microsoft, super-puzzle-fighter, Xbox-360
All products recommended by Engadget are selected by our editorial team, independent of our parent company. Some of our stories include affiliate links. If you buy something through one of these links, we may earn an affiliate commission.
Share
Tweet
Share