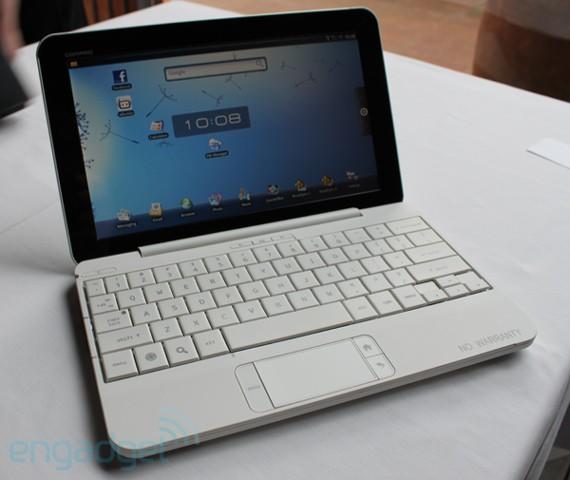 We visited with HP to see what's changed since we saw the Compaq AirLife during CES -- aside from it now having a name -- in early January. We were told by HP that the device's plastic housing has been improved, received confirmation that it's indeed running a 1GHz Snapdragon, and will be sold exclusively through a deal with Telefonica. The AirLife's performance was impressive while scrolling through carousels of photos, and control of the resistive display was also snappy with no stuttering while scrolling -- that we noticed. If reaching across the keyboard to touch the screen isn't your thing, you also have the option of using the touchpad that is equipped with three Android buttons for home, menu, and back. Sadly though, as it isn't a Google certified device, it won't have access to the Android Market, but rather will reach into Telefonica's homegrown option: mstore. We guess as long as the store offerings are decent, and easy for consumers to access, the AirLife may well get some attention come launch time in Spring of this year. Pricing remains a mystery, but if it is able to compete with Lenovo Skylight at $499, less the carrier subsidy, it could be pretty attractive. Video tour and some pictures are just below the fold.

In this article: airlife, Android, compaq, compaq airlife, CompaqAirlife, hands-on, hp, hp airlife, HpAirlife
All products recommended by Engadget are selected by our editorial team, independent of our parent company. Some of our stories include affiliate links. If you buy something through one of these links, we may earn an affiliate commission.
Share
Tweet
Share