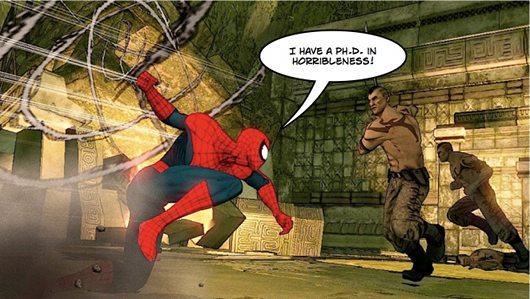 Activision has announced that Spider-Man: Shattered Dimensions will play host to a cavalcade of Spidey-related voice talent when it's released on September 7. The Spider-Men of each universe will be voiced by actors who have played the web-slinger in the past. Neil Patrick Harris, Josh Keaton, Christopher Daniel Barnes and Dan Gilvezan will voice the Amazing, Ultimate, Noir and 2099 variants, respectively.

Harris originally voiced the wall-crawler in Spider-Man: The New Animated Series; Keaton had the role in The Spectacular Spider-Man; Barnes played the part in the 1994 Spider-Man animated series; and, finally, Gilvezan voiced ol' web-head in Spider-Man and His Amazing Friends way back in the early '80s.

If that's still not enough for the true believers out there, Stan Lee himself will serve as the game's narrator. Meanwhile, Jim Dooley, composer for several games and films (The Da Vinci Code, inFamous), will provide the soundtrack. Now, if only someone at Beenox could find a way to squeeze in Bruce Campbell ...

Find the press release after the break.

Santa Monica, CA – July 23, 2010 – Activision Publishing, Inc. (Nasdaq: ATVI) and Marvel Entertainment (NYSE: MVL) announced today that Neil Patrick Harris will reprise his role as Spider-Man in Activision's upcoming Spider-Man: Shattered Dimensions, which is currently being showcased at San Diego Comic-Con. In the game, players traverse through four unique worlds from Spider-Man lore and take on the role of four distinctly different Spider-Men – Amazing, Ultimate, Noir and 2099 – which will be brought to life by Neil Patrick Harris along with Josh Keaton, Christopher Daniel Barnes and Dan Gilvezan, respectively.

Additionally, legendary creator and comic book icon Stan Lee will guide players through the storyline of Spider-Man: Shattered Dimensions as the game's narrator, and Emmy Award-winning composer Jim Dooley has created an original orchestral score for the game.

Spider-Man: Shattered Dimensions, which will be available September 7th, allows players to engage in nonstop heroic action as they traverse four unique worlds from Spider-Man's lore – Amazing, Noir, 2099 and Ultimate – within one unique storyline. Spider-Man: Shattered Dimensions transports players to a variety of locations, from lush jungles and dusty deserts to a futuristic NYC, and allows them to use unique gameplay styles for each Spider-Man, including stealth moves in Noir, gliding maneuvers in 2099, black-suited tendril attacks in Ultimate, and innovative web combat in Amazing.

Spider-Man: Shattered Dimensions has been rated "T" for Teen by the ESRB. Beenox is developing the game for Xbox 360® video game and entertainment system from Microsoft, PlayStation®3 computer entertainment system, Wii™, and PC, and Griptonite is creating a Nintendo DS™ version. Fans can learn more about Spider-Man: Shattered Dimensions by visiting www.SpiderManDimensions.com.

Marvel Entertainment, LLC, a wholly-owned subsidiary of The Walt Disney Company, is one of the world's most prominent character-based entertainment companies, built on a proven library of over 5,000 characters featured in a variety of media over seventy years. Marvel utilizes its character franchises in licensing, entertainment (via Marvel Studios and Marvel Animation) and publishing (via Marvel Comics). Marvel's strategy is to leverage its franchises in a growing array of opportunities around the world, including feature films, consumer products, toys, video games, animated television, direct-to-DVD and online. For more information visit www.marvel.com.

Activision maintains operations in the U.S., Canada, the United Kingdom, France, Germany, Ireland, Italy, Sweden, Spain, Norway, Denmark, the Netherlands, Australia, South Korea, China and the region of Taiwan. More information about Activision and its products can be found on the company's website, www.activision.com.
In this article: Activision, Beenox, microsoft, Neil-Patrick-Harris, nintendo, playstation, ps3, release-date, spider-man-shattered-dimensions, Stan-Lee, wii, xbox
All products recommended by Engadget are selected by our editorial team, independent of our parent company. Some of our stories include affiliate links. If you buy something through one of these links, we may earn an affiliate commission.
Share
Tweet
Share