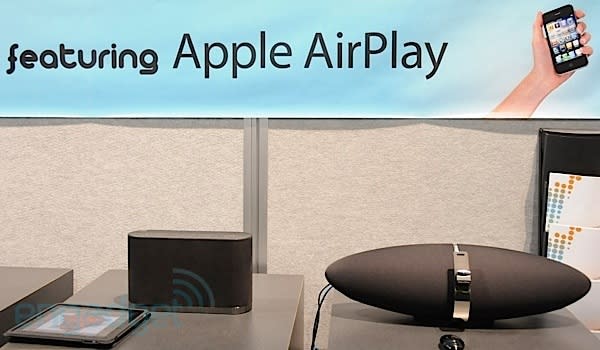 Although DLNA may have had a significant head start, the streaming media standard available on more than 9,000 devices is about to be challenged in a very big way by Apple's upstart AirPlay technology. At least it will be if Jordan Watters, BridgeCo's VP of Sales and Marketing, is to be believed. BridgeCo as you'll recall, is the company that makes the silicon for AirPlay devices -- currently an exclusive arrangement we're told. While Apple may have thrust BridgeCo into the consumer spotlight, this ten year old company has a long history of quietly providing networked media processors and connectivity software to a who's who of audio companies. Here at CES we've already seen three speakers from iHome, the Zeppelin Air from B&W, and a trio of speakers from the previously unannounced AirPlay partner Klipsch rolled out. And this is just the beginning.

According to Jordan Watters, AirPlay devices could ultimately dwarf "made for iPod" audio docks by 2x to 4x. Part of the reason for Jordan's optimism is the fact that so many iOS devices have already been sold and that many audio devices already on the market using BridgeCo chips can add AirPlay functionality via a software update, including the nine receivers just announced from Denon and Marantz. "The ecosystem is already there," he said smiling. And unlike iPod docks which are usually sold at a rate of one per iOS device, Watters sees consumers purchasing multiple AirPlay devices for every iOS device sold in order to enable whole-home distributed audio. In fact, growth could come as a "step function ramp sucking into the market," Jordan enthused. In other words, he expects AirPlay growth to be explosive. We'd chalk up the hyperbolic talk to Jordan's marketing role if it weren't for the abundance of anecdotal evidence supporting his claims here at CES. To start with, the company's modest meeting room was packed with interested manufacturers poking around BridgeCo's AirPlay offering. Jordan's also booked back-to-back-to-back with meetings until the show ends (and into the coming weeks we suspect). But what really convinced us was an all-in-one speaker prototype from a major consumer electronics company that was quickly whisked away before meeting the sensor beneath our D300's lens. If they're involved, well, we expect the rest will follow.
In this article: airplay, apple, bowers and wilkins, bowers wilkins, BowersAndWilkins, BowersWilkins, bridge co, bridgeco, ces, ces 2011, ces2011, denon, dlna, features, ihome, ios, ipad, iphone, ipod touch, IpodTouch, Klipsch, speculation
All products recommended by Engadget are selected by our editorial team, independent of our parent company. Some of our stories include affiliate links. If you buy something through one of these links, we may earn an affiliate commission.
Share
Tweet
Share