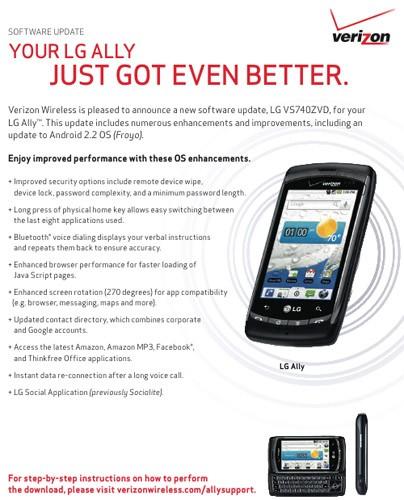 It's not often that a carrier and manufacturer team up to beat an estimated launch date, so color us stoked to see Verizon start to push the official Froyo update for LG's Ally starting this week -- a little earlier than the February guidance they'd given before. Of course, the phone had originally been promised an eventual update way back in August of last year... so yeah, we've got to credit Ally owners for their patience on this one. Looks like there are some updates to LG's custom apps and widgets, too, along with bug fixes (instant data reconnection after long calls, for instance), so we'd say this is a build you're going to want to grab as soon as you can.

In this article: ally, android, android 2.2, Android2.2, breaking news, BreakingNews, froyo, google, lg, mobile, update, upgrade, verizon, verizon wireless, VerizonWireless, vzw
All products recommended by Engadget are selected by our editorial team, independent of our parent company. Some of our stories include affiliate links. If you buy something through one of these links, we may earn an affiliate commission.
Share
Tweet
Share