J. Schulman
February 14th, 2011
In this article: apple, bluetooth, bluetooth keyboard, BluetoothKeyboard, clam case, clamcase, ipad, ipad keyboard, ipad keyboard case, IpadKeyboard, IpadKeyboardCase, review
We know you've been on pins and needles since we cleared up some of the confusion regarding the Clamcase, but a review unit finally landed on our doorstep to put through the paces. If you need a refresher, this was one of the earliest iPad keyboard cases to be introduced, but has only started shipping recently after some manufacturing woes. We've had sometime to put this baby through the paces so read past the break for the lowdown.
%Gallery-116485%
CLAMCASE
0
SCORE
Engadget
N/A
Critics
5 reviews
64
Users
2 reviews
90 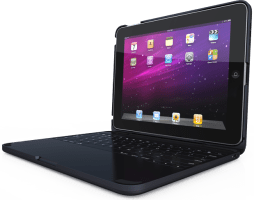 Early product renders showed the Clamcase with a glossy black finish, but the final shipping product has a matte enclosure. We actually prefer it, though we think a soft touch coating would've been a bit nicer than straight up plastic. Closed, the Clamcase very much resembles a laptop, albeit one with a smaller footprint than Apple currently offers (notice we didn't say thinner).

The unit is split into a bottom part that houses all the electronics and a top part where you insert your iPad. The hinge that connects both pieces is the other main design element, and seems to be pretty sturdy from our non-scientific tests. Since you can use the case in 'laptop mode' or as a folio, the hinge is pretty important, and can be contorted to any angle possible.

Inserting the iPad is as easy as aligning the edges, and the fit seems to be secure and tight. Removing it requires a bit of force as well as some fidgeting to make sure all the edges get freed. We have a small possible concern in that the mechanism for holding the iPad securely in place is a lip that actually digs into the small line between the silver iPad enclosure and black iPad bezel (see photo above). It's very minor -- and could just have been this instant -- but something to keep in mind if you plan on constantly inserting and removing it from the Clamcase. We should also mention that the Clamcase itself weighs in at 1.8-pounds, which is more than the actual iPad, and together weighs more than both the 11- and 13-inch MacBook Air models. Friends who picked up the device noticed the weight immediately, and to be frank it could be a dealbreaker for many. If there's no weight advantage provided by this, why use it over a traditional laptop? You've also got to keep in mind that with the iPad 2 seemingly around the corner it likely won't fit in Clamcase V1, so that's another fundamental issue right there.

The meat and potatoes of the Clamcase is the keyboard itself, as that's the real reason you'd want one of these. We appreciate that the Clamcase guys tried to make the keyboard as wide as possible without adding more width to the iPad itself, but to be quite honest it feels cramped. We initially found typing to be a bit awkward, but we certainly improved with some practice. Other friends we consulted agreed that the keys are just far too small and spaces way too close together. Part of the problem is that there's just not enough space between the keys, so you could find yourself accidentally triggering neighboring letters. Quality wise, the keyboard feels cheap and that's really unacceptable for a product whose main purpose is to make typing better. Don't get us wrong, we typed faster on this than on the virtual keyboard, but there's only a small amount of travel to the keys and the click is only moderately satisfying. Being nitpicky, some of the keys appear to be a little slanted and the key labels are somewhat sloppily placed. Our biggest issue was with the space bar, which just seems far too small and not far down enough. We don't understand the constraint, especially given that there's no trackpad to take up space below.

On the upside, however, there's a row of convenience keys above the numbers that do add some welcomed features. There are home, lock, and search keys as well as volume controls, play/pause, and fast forward. You can also cut, copy, and paste, and activate the Slideshow feature with a single click -- but more on that in a bit.

The keyboard also has some other standard keys such as control, option, and Fn that don't do much on the iPad. While it's true you can use it as a standard Bluetooth keyboard for any device, we can't imagine anyone besides an iPad owner buying this, and feel that this space could've been used more effectively. You can use familiar cut, copy, and paste shortcuts on the keyboard, but there are already dedicated keys for performing these functions.

We typed the entirety of this review using the Clamcase in a variety of use cases and have found scenarios where it's both most useful and highly clunky. The most interesting aspect of using it is that unlike laptops, most of the weight is in the top part where the iPad itself sits. This made it a bit frustrating to use on a couch, as any time we moved our hands from the palm rest the weight of the screen would pull it backward. This problem didn't exist when using it on a table, and the hinge did a good job of keeping the screen in place though.

The other interesting thing about using the Clamcase is just how much it tries to aesthetically transform your iPad into an actual computer. This sounds great in theory, but we found ourselves searching for the trackpad on more than one occasion. iOS was really designed for direct input from your finger, so pretty much anything besides text input requires you to interface with the iPad screen itself. (Update: It appears you can select text using some contortion of arrows and modifier keys -- still not as ideal as a mouse). This isn't something you realize when using the iPad in your lap, but just imagine if your laptop didn't have a trackpad and instead had a touchscreen. It reminds us a little bit of this particular slide that was shown during Apple's Back to the Mac event: constantly lifting your finger to interact is a major annoyance. The perfect example of this conundrum can be seen when trying to copy and paste text. While there are dedicated keys for performing these functions, you've still got to use your finger to select the text, and at that point you don't even need the key to do so.

In addition to keyboard mode, you can flip the keyboard all the way around back and use it as a regular tablet case, but for that kind of use it's really unacceptable the amount of heft it adds. Not to mention the fact that you will have to power it down to avoid accidental input, and possibly even damaging the keyboard itself. You need two hands to hold the iPad + Clamcase together comfortably, and even at that point it's still seriously heavy. On top of this, fingers grasping the case will inevitably activate keys accidentally, so you've got to remember to power down the device if you're using it in tablet mode. This reminds us of another qualm with the hardware -- the lack of a power toggle. Instead there's a key in the upper right corner that handles powering the unit on and off, but there's not even a status light or any feedback other than the Bluetooth icon activating on the iPad screen. We would've much preferred a switch that would more quickly indicate the power status -- and more quickly toggle it -- and a battery meter would've been nice too. (Update: Clamcase tells us if you hold fn+ctrl LED blinks indicate percentages.)

The Clamcase is a decent offering in terms of iPad keyboard cases, but the amount of heft it adds for the limited functionality it brings makes it seem a whole lot better in theory than in reality. We won't be making this our primary iPad case, but for those times when you know you'll need a keyboard, the real thing certainly beats the virtual alternative. For students looking to use an iPad in class rather than lugging around a full-sized laptop, we could see this being a real hit if it was lighter and had a better keyboard -- but we still don't think the iPad is a good enough laptop replacement. Friends we showed the device to agreed that typing was difficult and that the weight gain was a problem. We'll probably keep waiting for the perfect iPad keyboard case to call our own, but if you don't have the patience to do the same you may want to give the Clamcase a shot.
All products recommended by Engadget are selected by our editorial team, independent of our parent company. Some of our stories include affiliate links. If you buy something through one of these links, we may earn an affiliate commission.