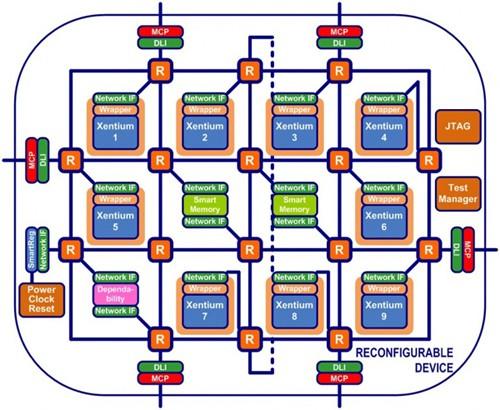 The race for ever-tinier computer chips is on, and barring physical limitations, doesn't seem to be slowing anytime soon -- but with chips, as with humans, the smaller they get, the more fragile they become. A team of researchers called CRISP (Cutting edge Reconfigurable ICs for Stream Processing) is working to create a self-repairing multi-core processor that would allow on-chip components to keep on shrinking, while combating concerns over accelerated degradation. Basically, the team's conceptualized a chip that allows for 100 percent functionality, even with faulty components. With multiple cores sharing tasks, and a run-time resource manager doling out those tasks, the chip can continue to degrade without ever compromising its intended functions -- a process CRISP calls graceful degradation. Once one core fails, the on-chip manager assigns its task to another core, continuing on in this fashion for the complete lifetime of the chip. Of course the technology is still in its infancy, but if CRISP's chips comes to fruition, we could see virtually indestructible processors that make 14nm look bulky by comparison.
In this article: chip, component, component degradation, ComponentDegradation, computer chip, computer chips, ComputerChip, ComputerChips, degradation, graceful degradation, GracefulDegradation, microprocessor, multi core, multi-core, multi-core processor, Multi-coreProcessor, MultiCore, nanoscale, nanotech, nanotechnology, processor, self-repairing, small, tiny
All products recommended by Engadget are selected by our editorial team, independent of our parent company. Some of our stories include affiliate links. If you buy something through one of these links, we may earn an affiliate commission.
Share
Tweet
Share