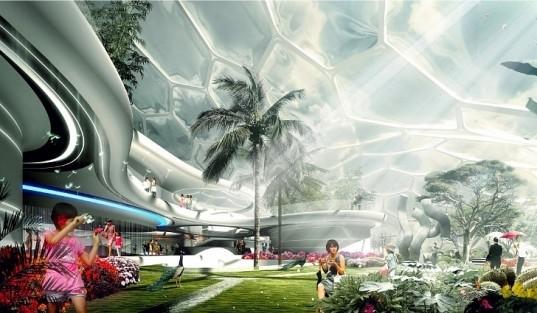 This week Inhabitat showcased several groundbreaking feats of high-tech architecture - starting with plans to transform the United States' tallest skyscraper into a soaring solar farm. We also saw a vision for a geodesic home of the future that is popping up in China this year, and we learned that scientists in Qatar are developing a series of solar-powered artificial clouds that will cool the country's stadiums during the 2022 World Cup.

It was a big week for energy news as well as Germany and Italy announced plans to abandon nuclear power in the wake of the crisis in Japan. Tata & MIT also announced a breakthrough technology for generating power from water, and we saw solar energy reach new heights as Suntech set off to install the world's tallest solar plant on the Tibetan Plateau. Speaking of soaring green designs, we watched a brand new electric vehicle take to the skies as the solar-powered Elektra One airplane successfully completed its maiden flight.

This week we also showcased several cutting-edge examples of wearable technology including an app that instantly transforms any drawing into a made-to-measure dress. We also learned that Virgin Atlantic now offers passengers bespoke shoes while they wait, and we took a look at a futuristic pregnancy belt that offers an inside look at the womb. Finally, we saw several amazing examples of recycled design - Chinese artist Wing Wah has created a set of scrap metal transformer robots that look just like the movies, and designer Mati Karmin has transformed defused land mines into an edgy set of interior furnishings.
In this article: belt, clothing, design, Elektra One, ElektraOne, geodesic, Inhabitat, inhabitats week in green, InhabitatsWeekInGreen, nuclear, nuclear power, NuclearPower, pregnancy, scrap metal, ScrapMetal, shoes, solar, solar power, SolarPower, Tata, water power, WaterPower, week in green, WeekInGreen
All products recommended by Engadget are selected by our editorial team, independent of our parent company. Some of our stories include affiliate links. If you buy something through one of these links, we may earn an affiliate commission.
Share
Tweet
Share