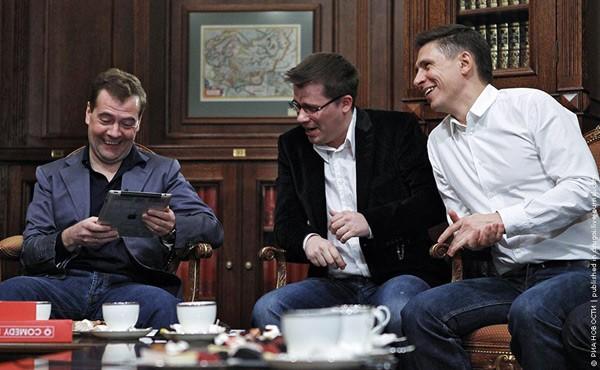 In non-Soviet Russia... presidents tend to receive some pretty swanky high-tech gifts. Dmitry Medvedev, leader of the good people of Russia and one of the few men to successfully rock denims with a suit jacket, has been bestowed with a fresh new iPad 2 and his facial expression seems to suggest he was immediately irradiated with blasts of magic, fairy dust, and the smiles of innocent children from across the world. We just hope he hasn't seen the crummy camera yet, he is something of a tablet photography connoisseur.

Darren: "Why, lookie there! I can see Alaska from my iPad 2!"
Joe: "I can't believe I'm playing chess with Garry Kasparov!"
Jose: "I wonder if Barack also likes to play Risk on his iPad."
Josh F.: "See? The cat is talking but he's saying 'has' instead of 'have!'"
Don: "Kickin' in the front seat, sittin' in the back seat, gotta make my mind up, which seat can I take?"
Tim: "Look, it already has Words with Comrades installed!"
Vlad: "And this has push notifications for when Mr. Putin has instructions for me, yes?"
Richard Lawler: "10,000 apps and it's still cheaper than buying the New Jersey Nets."
Myriam: "And so if I tap here, it opens the door to the shark tank... and over here are the laser controls. Cool, eh?"
Richard Lai: "Hullo Anna!"
In this article: apple, apple ipad, apple ipad 2, AppleIpad, AppleIpad2, caption, caption contest, CaptionContest, captions, Dmitry Medvedev, DmitryMedvedev, ipad, ipad 2, Ipad2, medvedev, president, russia, russian president, RussianPresident, slate, tablet
All products recommended by Engadget are selected by our editorial team, independent of our parent company. Some of our stories include affiliate links. If you buy something through one of these links, we may earn an affiliate commission.
Share
Tweet
Share