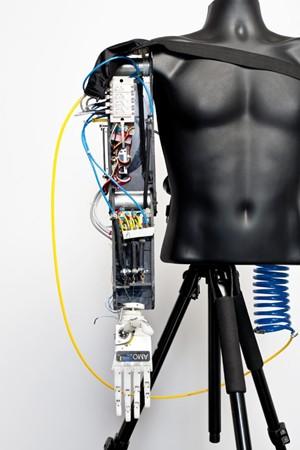 We're no strangers to amputees moving stuff with their minds -- for that matter, a thought-controlled prosthetic isn't really new to us, either -- but the pneumatic arm you see here isn't like other intelligent limbs. Unlike most mind-operated prosthesis, the Artificial Muscle-Operated (AMO) Arm doesn't require invasive surgery, and according to its inventors, it costs a quarter of the price to make. Here's how the thing works: the host human wears a headset that sends brain signals to a chip in the arm that then matches those signals to a database of related actions, triggering a series of pneumatic pumps and valves to move the limb. Thus, if the wearer thinks 'up,' the arm moves up. The AMO Arm's creators, a pair of undergraduate biomed students, say that not only is their invention a steal to produce, but it also takes just minutes to acclimate to, which has us wondering, do you have to be missing an arm to get a hold of one of these things? You know, we can always use an extra hand. Full PR after the break.
Show full PR text

Ryerson biomedical engineering students Michal Prywata and Thiago Caires' prosthetic arm is controlled by brain signals, which is a first in medical prosthetics.

Two Ryerson University undergraduate biomedical engineering students are changing the world of medical prosthetics with a newly developed prosthetic arm that is controlled by brain signals. The Artificial Muscle-Operated (AMO) Arm not only enables amputees more range of movement as compared to other prosthetic arms but it allows amputees to avoid invasive surgeries and could potentially save hundreds of thousands of dollars. The AMO Arm is controlled by the user's brain signals and is powered by 'artificial muscles' - simple pneumatic pumps and valves - to create movements. In contrast, traditional prosthetic limbs – which typically offer more limited movements – rely on intricate and expensive electrical and mechanical components.

Developed by third-year student Thiago Caires and second-year student Michal Prywata, the AMO Arm is controlled by the brain and uses compressed air as the main source of power. The digital device makes use of signals in the brain that continue to fire even after a limb is amputated. Users wear a head-set that senses a signal – for example, the thought "up" – and sends it wirelessly to a miniature computer in the arm. The computer then compares the signal to others in a database. The resulting information is sent to the pneumatic system, which in turn, activates the arm to create the correct movement. Simulating the expansion and contraction of real muscles, the system makes use of compressed air from a small, refillable tank in the user's pocket. The artificial muscle system created by Caires and Prywata is a first in the field of prosthetics and they continue to work on perfecting their system. For example, the pair is working on a design to fit the tank into the arm itself.

Since the device does not include microelectronics and motors, it costs one-quarter of other functional prosthetic arms, which can run users more than $80,000, depending on the complexity of the prosthesis. Other prosthetic arms with a similar degree of control require patients to undergo a complex muscle re-innervation surgery – a complicated procedure that costs about $300,000 and is not available in Canada and not covered by the provincial health plan. As the AMO Arm is non-invasive, the period of adjustment for new users is drastically decreased. While traditional prosthetics may require weeks of learning and training, basic function with the AMO Arm can be mastered in mere minutes.

"In just ten minutes of practising, a person can pick up the mind-control aspect of the technology," says Prywata. Moreover, he says, the AMO Arm will not only benefit amputees, but could also be used as an assistive device on wheelchairs, enabling users to reach things with greater ease. The technology could also be used by the military to facilitate remote operations and in situations requiring robotics.
The AMO Arm can currently move up, down, left, right, as well as open and close.

The initial concept for the AMO Arm was developed shortly after Caires and Prywata met at a Ryerson Engineering open house in fall 2009. Each showcased different projects and were impressed with the other's work. It took a year to develop the software program for the AMO Arm while the actual prototype was created during a marathon 72-hour design session.

Caires and Prywata are working to move each finger on the AMO Arm individually. "Independent finger movements require many more sensors," Caires says. "For example, while not impossible, it's still quite difficult to grab a key and unlock a door."

In the future, the pair would also like the AMO Arm to sense different materials (e.g., an egg versus a full bottle of water) and adjust the force used proportionately. They have already developed an innovative concept for capacitive sensing which detects different materials prior to contact. The students also have plans to develop an adaptive system, one that will progressively "learn" from a user's movements and carry them out seamlessly.

Although they are still students, Prywata and Caires are moving ahead on the commercialization of their innovations. They have formed their own company, Bionik Laboratories Inc. (www.bioniklabs.com), and are currently seeking three patents for the AMO Arm and their other technologies. Their recent acceptance into Ryerson's home of innovation and commercialization: the Digital Media Zone (DMZ) will help them in achieving these goals.

Gaining residency in the DMZ (www.ryerson.ca/dmz) was a key move for their business which, while still quite recent, has already yielded positive results. "We were really impressed with the DMZ space initially, but didn't know about all the resources at our disposal and the exposure it would afford us until we got here. The first day we arrived, we were meeting people, including CEOs and within a week we were shooting a piece for the Discovery Channel." says Prywata.

Through their time at the DMZ, Bionik is hoping to build their business and create partnerships and connections with organizations such as the Ministry of Research and Innovation (MRI) and MaRS, which fund medical research and development. "Our backgrounds are not business, so we have been learning quickly from the people around us at the DMZ."