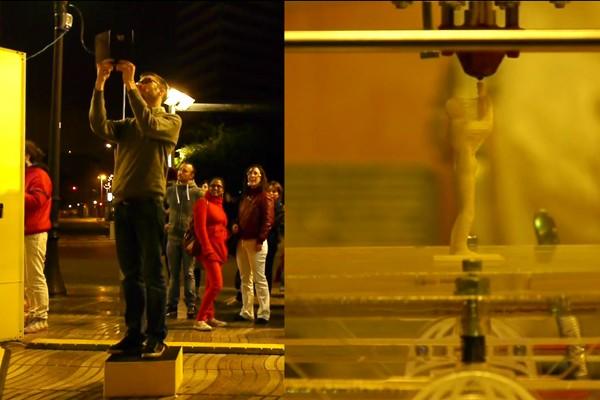 As souvenirs go, a miniature replica of yourself -- striking a pose of your choosing on Barcelona's La Rambla street -- is a far sight more original than a bullfights-and-senoritas snow globe. This past January, the hilariously titled BlablabLAB enlisted three Kinects and a RapMan 3.1 to snap passersby and render them into personalized tchotchkes, in a project called Be Your Own Souvenir. Subjects stood atop a small platform, mimicking the human statues on La Rambla, as the Kinects captured their likeness in full 360-degree glory. The resulting images were then processed as a mesh reconstruction, saved as a G-code file, and then fed through a 3D printer -- and voila, out popped the tiny statuettes. If you're a fan of flashy editing and Kinect-based street experiments, check out the video after the break.

Be Your Own Souvenir! from blablabLAB on Vimeo.

In this article: 3D printer, 3D printing, 3D rendering, 3D souvenir, 3dPrinter, 3dPrinting, 3dRendering, 3dSouvenir, Barcelona, be your own souvenir, BeYourOwnSouvenir, BlablabLAB, CNC, computer numerical control, ComputerNumericalControl, hack, hacksaw, kinect, kinect hack, kinect-hacks, KinectHack, Microsoft, microsoft kinect, MicrosoftKinect, RepRap, ReprapPrinter, sounvenir, street performance, StreetPerformance, video
All products recommended by Engadget are selected by our editorial team, independent of our parent company. Some of our stories include affiliate links. If you buy something through one of these links, we may earn an affiliate commission.
Share
Tweet
Share