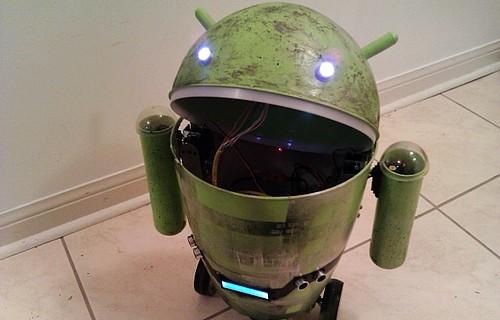 We've seen robots that look like they've had one too many, but we're pretty sure this little guy needs to check into rehab. Despite its absolutely adorable appearance, this Android seems hell-bent on destruction, literally beating itself up, and eventually falling on its face. Built using the requisite Arduino, a trash can, some LEDs, and a slew of other components, this little guy was apparently created in three days on a budget just barely exceeding $100. You can see a video of the waste-bin bot hitting rock bottom at the source link below, but please refrain from laughing; Android alcoholism is a serious issue.

In this article: android, android robot, AndroidRobot, arduino, bot, bots, diy, drunk, drunken, rc, rehab, remote control, remote controlled, RemoteControl, RemoteControlled, robot, robot rehab, RobotRehab, robots, trash, trash can, TrashCan, video, waste
All products recommended by Engadget are selected by our editorial team, independent of our parent company. Some of our stories include affiliate links. If you buy something through one of these links, we may earn an affiliate commission.
Share
Tweet
Share