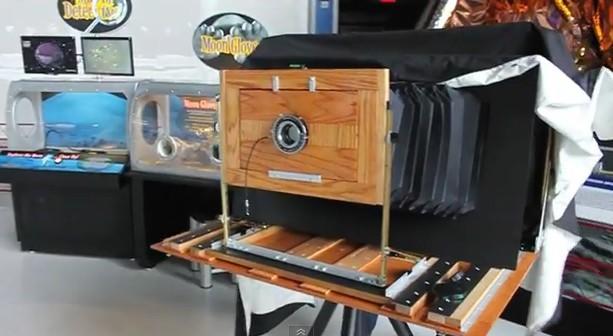 Darren Samuelson made a really large camera -- some might even go so far as to say he made a "great big camera." The thing weighs 70 pounds and takes a lot of maneuvering and math to operate everything from the lens to the old timey accordion-style bellows. In spite of such difficulties, however, Samuelson embarked on a tour of the US with the monstrous rig in tow, shooting this country from coast to coast in black and white. After the break, check out video of the camera in action at the US Space and Rocket Center in Huntsville, AL. You can also see some of his progress and photos in the source link below.

In this article: alabama, darren samuelson, DarrenSamuelson, great big camera, GreatBigCamera, huntsville, us space and rocket center, UsSpaceAndRocketCenter, video
All products recommended by Engadget are selected by our editorial team, independent of our parent company. Some of our stories include affiliate links. If you buy something through one of these links, we may earn an affiliate commission.
Share
Tweet
Share