YouTube for Android 4.0 ends buffering on your favorite videos with precaching, adds remote

How would you change Motorola's Xoom 2? 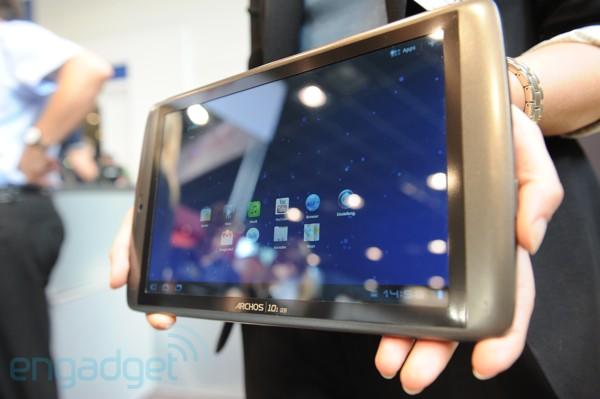 So, so many tablets this week at IFA. Archos's pair of Honeycomb slates may not have garnered the same sort of excitement as, say yesterday's Samsung Galaxy Tab 7.7 or Toshiba AT200, but there are a lot of interesting things going on with the 80 G9 and 101 G9. From an aesthetic standpoint, these are pretty nice looking devices (the 80 and 101 look largely the same, save for the difference in footprint and screen size), though they're not quite on-par with the two aforementioned tablets, in terms of build. Among other things, they're a bit on the chunky side and have fairly considerable bezels.

Like those devices, the G9 tablets run Android 3.2, though a decidedly less skinned up version than Samsung's device. And their 1.5GHz processor assures that they can handle the OS with ease. Archos's tablets also have a few tricks up their collective sleeve. Flip the devices over, and you find a kickstand on one side and a slot on the other than opens up to reveal a USB port designed for the company's proprietary 3G stick.

Also pretty awesome is the ability to configure their hard drives up to 250GB -- a fairly staggering sum in the tablet world. We got to spend some hands-on time with both -- check out a video after the break.

In this article: android 3.2, Android3.2, archos, Archos 101 G9, archos 80 G9, Archos101G9, Archos80G9, G9, honeycomb, ifa, ifa 2011, Ifa2011, video
All products recommended by Engadget are selected by our editorial team, independent of our parent company. Some of our stories include affiliate links. If you buy something through one of these links, we may earn an affiliate commission.
Share
Tweet
Share