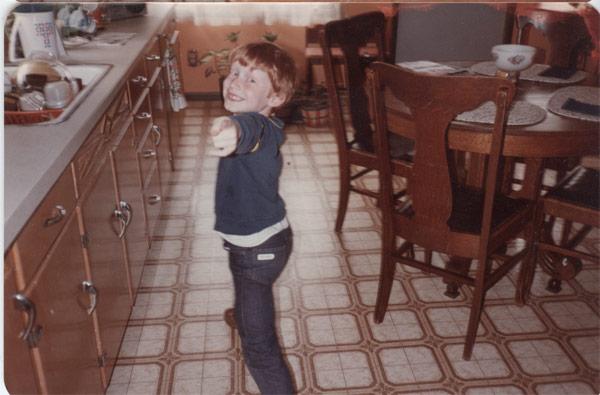 Welcome to Growing Up Geek, an ongoing feature where we take a look back at our youth and tell stories of growing up to be the nerds that we are. Today we have Hacker Extraordinaire (and host of his own show), Benjamin J. Heckendorn!

As a kid growing up in Richland Center, WI, I sometimes had to be extra creative in finding things to occupy my time, and my creativity naturally gravitated toward all things technology. Soldering, erector sets and deconstructing toys were the epicenter of my young life. Taking things apart to find out how they worked was essentially a rite of passage for me to becoming the geeky man I am today.

I got my first taste of programming in elementary school on a collection of even-then old Apple II's, but I really got into it wholesale when, at age 11, I got my first computer - an Atari 800. While still ancient for the time, I did a lot of programming on it and learned a lot of fundamentals that are useful to this day.


During my teenage years, I started to veer off the technology path a bit and dipped my feet in the pool of independent film making. I bought a camcorder and just started filming movies, using two VCRs taped together to edit whatever footage was captured (little did I know how useful this skill would be later in life!). Aside from film making throughout my young adulthood, I dabbled in many tech-related hobbies, but never forgot my love for gaming, electronics and programming.

At age 22, I had my first "real job" as a graphic artist and I was able to use my layout and design skills to build my first mod -- I hacked an Atari 2600 gaming system to make it smaller, portable and complete with a graphic arts-inspired enclosure. I created a "Geocities" site about the project to share with friends, and I quickly realized how many other "geeks" there were with interests in obscure hobbies. At this point in time, the "geek culture" hadn't really caught on so I was very surprised by the level of interest I received in the mod -- anywhere from 50-75 emails a day!

After a segment on TechTV in 2004, where I talked about the process of making portable units, I was offered a book deal from Wiley Publishing, Inc., and my book Hacking Video Game Consoles was born.

Looking back, modding the Atari 2600 was probably the best idea I have ever had; it certainly opened many doors for me career-wise, and it taught me to keep pushing forward on what I was really passionate about, a lesson I've come to appreciate greatly throughout my life.

After the book, I was lucky enough to eventually turn my addiction to video games into a career, entering the corporate working world in 2004 building video game prototypes for a range of companies. It was then that I realized being a geek was an incredibly positive attribute that allowed me to use my unique skills to help those with limited accessibility.

My newfound career allowed me to attempt another build I'd always wanted to try: a pinball machine. I combined my fascination with the mechanical aspects of pinball and my appreciation for the work of thespian Bill Paxton and thus, the Bill Paxton Pinball Machine was born! I spent many grueling hours building that machine, but I loved the challenge and learning how pinball machines work -- and it's always fun to inspire others. I have a few ideas for future pinball machine builds, but my fellow pinball junkies will just have to wait and see if those pan out.

That brings us to the present. Last year, I embarked on a new journey as internet television host of element14's "The Ben Heck Show," an online show dedicated to educating viewers on the underlying technology powering each of the featured mods. With my interest in modding and element14's collaborative engineering community, it was a perfect match. I'm doing what I love and it complements element14's ongoing commitment to help like-minded individuals collaborate and exchange ideas to inspire new and innovative designs. Season One was a glaring success, and I attribute that to the enthusiasm and interaction of the show's viewers.

As I embark on an all new second season of "The Ben Heck Show," set to go live on October 10th, I plan to dig even deeper into my inner "geek" and hopefully try my hand at some new and interesting hacks and builds, like using embedded systems and products I'm not familiar with to not only teach the audience what they can be used for, but teach myself as well. I was fortunate to realize early on that if you want to do something, do it. Never let fear be a factor and dissuade you from accomplishing big things. The path to becoming the person I am today has been a winding one, filled with twists and turns galore, but deep down I always knew that "geek" is not only who I have become, but what I was born to be. And so my story goes: toy-destroyer turned video gamer turned programmer turned movie maker turned author turned electronics hacker / modder show host. It's been the ride of a lifetime, and I wouldn't trade my journey to "geeky" adulthood for the world.

Ben Heck has been a contributor to Engadget, a staple of our DIY coverage and a huge friend and asset to the entire hacker community. He even let us inside of his kingdom for an Engadget Show shoot. These days, he can be found on Twitter (@benheck) and schooling us all as host of "The Ben Heck Show."

In this article: ben heck, BenHeck, benjamin heckendorn, BenjaminHeckendorn, diy, hack, hacker, hacking
All products recommended by Engadget are selected by our editorial team, independent of our parent company. Some of our stories include affiliate links. If you buy something through one of these links, we may earn an affiliate commission.
Share
Tweet
Share