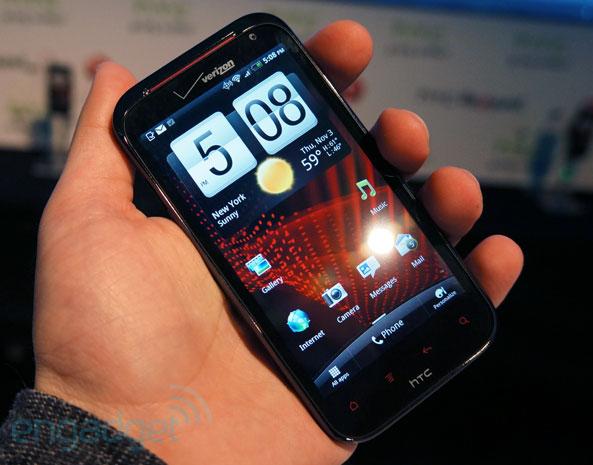 As expected, the HTC made the Rezound official at today's event in New York. Also, as expected, this is one multimedia-centric phone we're looking at here, starting with its big and bright 4.3-inch 720p Super LCD display. Despite its decently large screen size, the phone is surprisingly light and feels nice in the hand. Unlike Motorola and Samsung, however, the company wasn't all that focused on thinness with the Rezound, and the thing rocks a slightly convex back -- not unlike the HTC Vivid on AT&T, which has a prominent hump on the back cover. However you slice it, though, it's a great looking phone. The company clearly put some though into the appearance of the device, with its textured back featuring red accents -- a clear reference to the company's partnership with Beats. If you read our review of the Sensation XE, you know HTC's design philosophy didn't change much in its journey across the Atlantic.

HTC Rezound ad pays Verizon stores an early visit, soonish launch likely
HTC confirms security hole, says patch is incoming
HTC Vivid review
Unfortunately, the company wasn't showing off those custom Beats earbuds for our demo, and we had to settle for an over-ear pair -- naturally, we rocked a little Dre on the thing. As you'd expect, the sound is extremely bass-heavy. You can thank Beats for that, no doubt. Interestingly, HTC apparently didn't devote all that much time to the volume buttons on the side of the device, which aren't quite as responsive as we'd like. The music continues to play, even as you launch other apps, which can be bit a distracting when you're trying to stream a video using the phone's LTE radio. For the record, that video loaded quite quickly.

The latest version of Sense (3.5) -- last seen on the HTC Rhyme -- runs smoothly here, thanks to the 1.5GHz dual-core processor inside. Flipping through home screens is breezy, as is launching the camera app the company talked up during today's event. The Rezound is coming at you on Verizon November 14th for $299. Until then, have a gander at our gallery of preview shots and rock out to a hands-on video after the break.

In this article: 4g, audio, beats, beats audio, BeatsAudio, cellphone, hands-on, htc, htc rezound, htc vigor, HtcRezound, HtcVigor, leak, lte, mobilepostcross, music, press shots, PressShots, rezound, sound, Verizo, verizon wireless, video
All products recommended by Engadget are selected by our editorial team, independent of our parent company. Some of our stories include affiliate links. If you buy something through one of these links, we may earn an affiliate commission.
Share
Tweet
Share