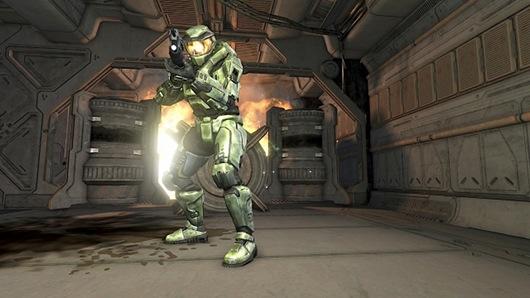 You never forget your first. Way back in 2001, halfway through my first year of college, my parents unexpectedly bought me an Xbox for Christmas. My first game was Dead or Alive 3, but the one I'll always remember was something called Halo: Combat Evolved. I'd never heard of it before, but the editors of my gaming magazine of choice -- EGM, as I recall -- gave it not one or two or three, but four 10 out of 10s.

I picked up a copy and the rest, as they say, is history. I played through the campaign alone, and again with friends, and again with my brother, and again with my then future in-laws. I played multiplayer at the only LAN party I've ever attended and I got slaughtered, falling countless times to the effortless pistol precision of friends-of-friends who were actually geekier than I was. But it didn't matter, because Halo was a blast.

Ten years later, it still is.

What's new this time around? The most obvious addition to Halo: Combat Evolved Anniversary is the enhanced graphics. Similar to other "special edition" remakes of late -- Monkey Island, Another World etc. -- Halo's revamped graphics are running on top of the original engine, meaning you can switch between the original and enhanced visuals at any time. It's a neat trick, though it can take a few seconds, so I'd avoid switching in the middle of a firefight. Also, strangely, you can't switch during cutscenes, which seems like the optimal time to sit back and marvel at the changes. Still, I suppose the fact that it works at all is impressive.

The new visuals employ lots of bright colors and add intricate details to the (understandably) dated presentation of the original. There are a few hiccups here and there, especially the facial animation -- Captain Keyes looks downright weird -- but after a few minutes of play I found it difficult to switch back to "classic" mode.

The campaign itself has a few extra wrinkles, notably the addition of collectible skulls and terminals. As in other Halo titles, a skull is hidden in each level. Upon collection, each skull can be activated to change the game and (for the most part) make things more challenging. Each level also hides a terminal, offering insight on the story from the perspective of Halo's infamous AI, 343 Guilty Spark. Additionally, two-player co-op is now playable via Xbox Live, a very welcome addition to one of the game's best features.

The campaign's Kinect features seem perfunctory, and they might be given that they aren't even mentioned on the box and are only available after an Xbox Live title update. Some of the stranger options are, quite literally, the ability to change options mid-game. Saying "brighter," for example, will increase the screen brightness. While it's probably not what most people have in mind for Kinect, it's actually fairly convenient to, say, turn off subtitles without having to open a menu. You can also reload your weapon by saying "reload" or toss a grenade by saying "grenade," though the noticeable lag between command and on-screen action makes it impractical.

The best use of the Kinect allows players to scan and analyze Halo's characters and items. Once scanned, you can look up more info on each entry in the Library mode, where you can learn more about a Hunter's physiology, or about the inner workings of Halo's death-dealing pistol. For players who want to absorb Halo lore, or those who couldn't get enough scanning in the Metroid Prime series, the Library is surprisingly addictive.

Rather than add Xbox Live functionality to Halo's multiplayer mode, Anniversary features several recreated maps that function within the Halo: Reach engine. In fact, loading up Anniversary's multiplayer menu essentially boots up Reach, even reflecting as much on your Xbox Live status. Anniversary includes a new Firefight mission based on the campaign level "Halo," along with six maps: Hang 'em High, Prisoner, Beaver Creek, Damnation, Headlong and Timberland (from the PC version of Halo). Anniversary also includes a token to download the maps so they can be played from within Reach itself.

Each map features both a classic and modern configuration, with the former adhering as closely as possible to the original layouts. I spent a few hours with the maps along with a friend and some Joystiq staffers and I have to say that, even in the Reach engine, the original maps feel nearly the same as they did ten years ago. After just a few minutes of playing Slayer on the classic Beaver Creek layout, I easily fell back into the old rhythms, following the old routes, snagging the Overshield or making a run for the rockets while being mindful of the sniper perch on the opposite side of the map.

Enabling Reach's features or trying out the modern configurations of each map offers a new spin on the proceedings, opening up extra tunnels and paths, or giving players more options. Watching Dave sail over the catwalks of Prisoner with a jetpack made for a completely different but still enjoyable experience.

How's it hold up? Surprisingly, Halo still feels like a modern, relevant title -- something I probably couldn't say about other Xbox launch titles like, oh, let's say Fuzion Frenzy. The pacing of the campaign is still spot-on, and remains my favorite of the series.

Each encounter is meticulously crafted, allowing players to take them on how they see fit, exemplifying Bungie's (often misinterpreted) "30 seconds of fun" design philosophy. Elites are still some of trickiest, most challenging enemies around. It's still satisfying to down Grunts with the pistol. It's still enormously satisfying to kill a Hunter with a single bullet. Co-op is as fun as ever, and made even better with online support. The original graphics certainly don't pass today's muster, so the enhanced visuals are definitely welcome.

Technically, the multiplayer is only as old as 2010's Halo: Reach, so it holds up just fine. That said, with modern trappings like jetpacks turned off, the old maps handily evoke the late night joys of yore, now with the useful addition of Xbox Live.

If you somehow managed to miss Halo the first time around (if you weren't alive yet, for example) Anniversary is an easy recommendation. For those who have repeatedly toppled the campaign: the enhanced graphics, online co-op, skulls, terminals and Library mode should go a long way toward freshening up your umpteenth play-through. Then again, if you only want to revisit the multiplayer, you can always pick up the Anniversary maps as $15 Reach DLC.
In this article: 343-industries, bungie, deja-review, halo-combat-evolved-anniversary, kinect, microsoft, microsoft-studios, xbox
All products recommended by Engadget are selected by our editorial team, independent of our parent company. Some of our stories include affiliate links. If you buy something through one of these links, we may earn an affiliate commission.
Share
Tweet
Share