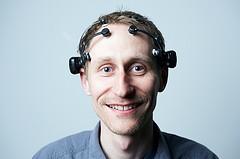 From the ongoing Google-Apple turf war on voice recognition to Microsoft's gesture tracking with Kinect, humans continue to push the envelope on how to interact with computers and devices. Now IBM says mind control will be the next field to see a big leap, predicting breakthroughs within the next five years. Keep in mind that they're not talking about controlling humans a la Gorilla Grodd ... yet. Instead, they're talking about controlling computer actions and devices via brain waves. IBM software guru and potential Borg recruit Kevin Brown (pictured right) has already been using a headset to move cubes on a computer screen at will. Given the ongoing progress with mind-controlled cars and BrainGate, IBM's prediction might not be too far-fetched.

In this article: brain, brain control, brain controlled movement, BrainControl, BrainControlledMovement, mind, mind control, MindControl, neural, research, sensor, sensors, telekinesis, thought, thought control, ThoughtControl
All products recommended by Engadget are selected by our editorial team, independent of our parent company. Some of our stories include affiliate links. If you buy something through one of these links, we may earn an affiliate commission.
Share
Tweet
Share