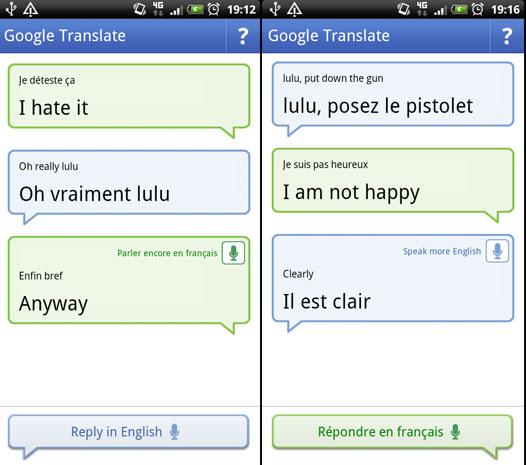 Let the voice recognition battle begin! Siri's already thrown the first punch in the soon-to-be dicey (albeit very consumer friendly) voice service wars, but don't count Google out just yet. The folks over at Mountain View are doing their best to strike back, adding extra functionality to the Google Translate app for Android. So, what's new in this version 2.2 upgrade? The company's expanded the app's previously limited speech-to-speech repertoire with support for an additional 12 languages, accessible via the alpha-tagged Conversation Mode. And to prevent you from any awkward (and potentially hilarious) moments of unintended translation, there's now a post-edit ability to keep those two-way foreign exchanges PG. Alright, so it's not quite the hands-free, HAL-like cyber assistant update we'd like it to be, but there's always Ice Cream Sandwich for that -- we hope. In the meantime, go ahead and hit up the source below to test out the experimental wares for yourself or check out a video demo of Conversation Mode after the break.

In this article: alpha, android, conversation mode, ConversationMode, english, google, google android, google translate, GoogleAndroid, GoogleTranslate, mobilepostcross, translate, translation, update, upgrade, video, voice recognition, VoiceRecognition
All products recommended by Engadget are selected by our editorial team, independent of our parent company. Some of our stories include affiliate links. If you buy something through one of these links, we may earn an affiliate commission.
Share
Tweet
Share