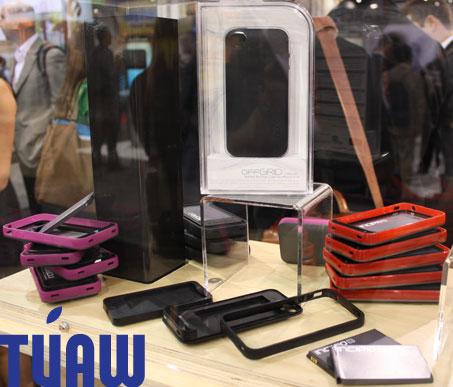 Incipio had a nice booth on the show floor at CES this year, and kindly showed TUAW some of its new offerings in the world of iPhone cases and spare batteries. The latest and greatest news from Incipio is licensed cases -- the company has secured licenses to print cases with art from Magic: The Gathering, Hasbro, Alpine Stars, and gaming accessory company Gunnar, so we got to see those cases displayed at the show. Incipio told us that while licensed cases don't normally sell quite as well as plain cases (we heard last year that black is always the best-selling color for iPhone and iPad cases), licenses can often bring in interest to the company, from consumer buyers to retailers and other companies.

Elsewhere in the booth, Incipio was also showing off its popular NGP case, which consists of two different pieces: a hardshell back that fits directly on the iPhone, and then a silicone case that snaps onto that one. Customers have really been drawn to the case, Incipio told us, because it's pretty easy to remove and change up. That's a trend they've noticed recently: That more and more customers are looking for iPhone cases that can come off easily, either because they want to try on multiple different cases for their iPhone, or just to allow the iPhone to connect to or sit in a dock.

Incipio was also displaying the Off Grid Pro, which is a battery pack that follows up on its Off Grid series. The Off Grid Pro kicks up the juice to 1700 mAh, and it features a very slim set of batteries that can be replaced inside the iPhone case itself. I thought it was surprisingly thin, so users looking for a extra battery boost that doesn't take up a lot of room might be interested in checking it out. The Off Grid Pro will be out at the end of February for $89.99.

Finally, Incipio showed us a prototype case it was working on that had both rigid and flexible parts. The rigid parts looked like an "X" and reached out to the corners of the iPhone, while the sides were flexible and allows for protection without making the iPhone much larger. That case was still in the making, a designer for the company told us, so it may never actually see store shelves in its current form. But Incipio and all of the other various case companies on the floor at CES are innovating as best they can, trying to both come up with new options and respond to consumer taste as quickly as possible.

Incipio's cases definitely stood out from the flood of similar accessories at the show this year. And just like last year, it was interesting to hear what kinds of trends and patterns are showing up in the world of iPhone and iPad add-ons.

In this article: cases, ces, ces-2012, chargers, incipio, iOS, iPad, iPhone, licensed, magic-the-gathering, prototype, rigid
All products recommended by Engadget are selected by our editorial team, independent of our parent company. Some of our stories include affiliate links. If you buy something through one of these links, we may earn an affiliate commission.
Share
Tweet
Share