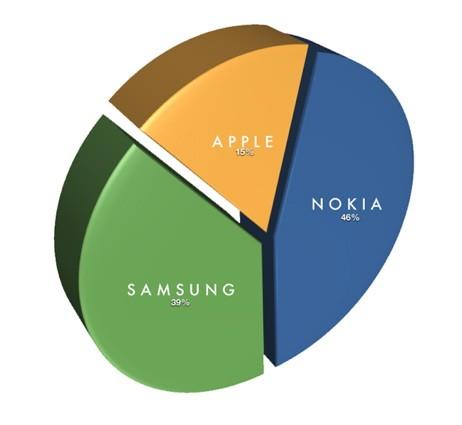 The latest figures are in from IDC: the top three global smartphone makers are Nokia, Samsung and Apple, in that order. Drilling down into the figures finds some surprises: Cupertino's third-place with only 8.7 percent of the market, while the giants of Korea and Finland are duking it out with 22.8 percent and 26.6 respectively. LG and ZTE are tied for fourth, but that's hardly good news for Goldstar, given that it's lost a staggering 42.2 percent of its market share in the last twelve months (Nokia was the other loser, eating 8.2 percent). The cause for the drop is in part the world's rejection of feature-phones (dropped faster than fashionistas rightly abandoned Ugg Boots and Jeggings) as millions upgraded to smartphones. After the break we've got the tables in full for anyone who wants to have their mind blown at the sheer quantity of handsets shipped in the last year, both financial and calendar.
Top five mobile phone vendors, shipments and market share: Q4 2011 (Units in millions)