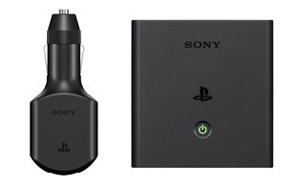 Sony's website now lists Japanese release dates and prices for two PS Vita power accessories that you're likely to need. The PCH-ZPC1 J portable charger is a 135g (4.8-ounce) unit that takes seven hours to charge to its full 5,000mAh capacity and is then good for around one and half charges of your console -- we reckon that'd equate to over 12 hours of mixed-use sessions or at least seven hours of solid gaming. It'll be out on April 5th for ¥4,500 ($60). Meanwhile, the PCH-ZCA1 J car charger will hit retailers a couple of weeks earlier on March 22nd priced at ¥1,500 ($20) -- and there's really not much more to say about it except that a dead Vita on a road trip would be both a travesty and an oxymoron. Oh, just in case it hasn't already been etched into your memory, February 22nd is launch day in the US and Europe.