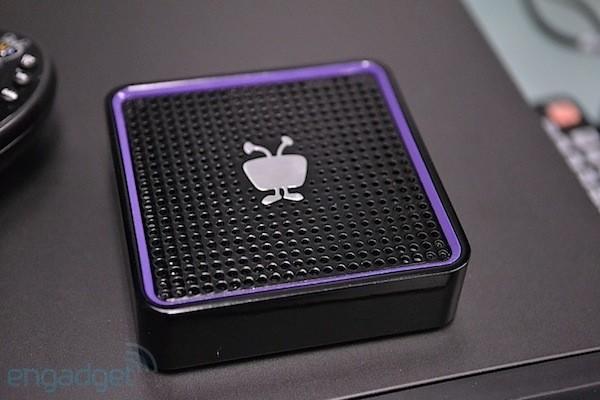 Today TiVo announced its earnings for Q4 2011 and the full year, however the most interesting note was word of a few new boxes on the way. From the sound of things, the company will deliver a four stream transcoder similar to the one we saw demonstrated at CES (pictured above) capable of dishing out video to multiple devices (phones, tablets, etc.) within the home simultaneously. Also on the way is an IP set-top box coming to retail that sounds very much like the TiVo Preview multiroom extender, however it could include access to internet video services as well. As mentioned on Tech of the Hub, CEO Tom Rogers' statements indicate the transcoder will enable both live streaming and DirecTV Nomad-style "high speed" sideloading of recorded content for offline viewing. More concrete are its positive numbers from the partnership with Virgin Media in the UK, and progress on a plan for Pace to develop TiVo-compatible set-top boxes for cable operators here and abroad. The Comcast partnership is also apparently progressing, with VOD access in beta trials and preparing to launch "soon" in the San Francisco area. And we continue to make strides to bring the look and feel of the TiVo user interface to other platforms beyond the DVR. To that end, we plan to launch a product later this year that we previewed at CES, which allows a viewer to seamlessly take recorded content to 2nd screens such as iPads, iPhones or Android devices on either a streaming or side-loaded basis. Its four-stream/fast side-load capability is something that other offerings don't provide today and we believe is a critical element of a true on-demand whole home experience. Today, TiVo's industry-leading whole home solution includes a 4-tuner DVR, a 2-tuner DVR, and an HD-STB. By the end of the summer, we'll further that lead with the addition of the four-stream transcoder and an IP-STB."

Tom Rogers, President and CEO of TiVo, said, "This was a break-out year for TiVo on a number of fronts. First, we increased total net subscriptions by 234,000 in the fourth quarter, the highest quarterly increase in close to six years, which led to an increase in overall net subscriptions of 11% year-over-year and we expect this growth to continue. Second, we extended our leadership position in the advanced television space by substantially increasing the number of major domestic and international operators that TiVo is now deploying with, including Virgin Media, Charter, DIRECTV, ONO, Suddenlink, RCN, and Grande. Third, we proved that our intellectual property has significant value, as consideration from two settlements has now totaled over $800 million to date. And finally, we translated this success into significant profit in the last fiscal year, highlighted by Adjusted EBITDA of $147 million and net income of $102 million. We believe that as we continue to execute on our operator deals, continue to drive value from our intellectual property, and continue to innovate in advanced television, we will be in a position for sustained growth."

Rogers continued, "In 2011, TiVo demonstrated it has quickly become one of the global leaders in advanced television, not only in terms of the number of announced deals, but in terms of the number of active commercial deployments. This was evidenced by our increasing number of operator customers who rely on TiVo to provide the consumer facing elements of their video product to drive a competitive advantage.

"To that end, our very successful deployment with Virgin Media continues to grow, during the quarter ended December 31, 2011 we added 270,000 new TiVo subscriptions, bringing the total number of Virgin Media TiVo subscriptions to 435,000. This is the third straight quarter we've seen significant subscriber growth from Virgin, a development that we believe is key to driving higher customer satisfaction and improved metrics for Virgin as well.

"Additionally in Europe, our deployment with ONO, Spain's largest cable operator is off to a good start, and we expect the subscriber additions to accelerate as ONO begins to offer TiVo to its full subscriber fiber footprint, highlighted by the recent launch of TiVo in ONO's largest market.

"In the U.S., continuing our great operator momentum from last fiscal year, we recently announced that Pace, the world's leading set-top box provider, has licensed the TiVo user experience to port onto its set-top boxes, enabling domestic cable operators to have access to the TiVo experience on a third party set-top box. We believe this will help our deal efforts, as Pace works with several prominent operators in the United States and other parts of the world and adds to our hardware porting efforts with Cisco and Samsung in Europe.

"Additionally, we continue to make progress towards a rollout with Charter. We're live in Fort Worth and in field trials in five additional markets. We look forward to getting our product out to the Charter footprint. Additionally, DIRECTV is now available nationwide and should soon start to be marketed through a variety of DIRECTV promotional activities. Other U.S. deployments, such as RCN, which is now deploying non-DVR TiVo boxes, as well as Suddenlink and Grande, continue to progress well.

"Further, our Comcast offering, which will enable access to Comcast's On Demand content on TiVo Premiere retail set-top boxes, is in market trial and will be launching in the near future in the San Francisco Bay Area with more markets to follow thereafter. With the inclusion of access to Comcast's On Demand service, TiVo subscribers will be able to enjoy more content spanning linear television, video-on-demand and over-the-top unlike any other commercially available experience. Also, Comcast will be offering professional installation, upon customer request, of TiVo Premiere boxes at no charge. Comcast will also promote the availability of Comcast's On Demand content on TiVo Premiere DVRs in each market where this is enabled. We believe this offering will positively benefit our retail efforts this coming year.

"We believe our distribution successes have been driven by our conscious decision to invest heavily in our R&D to position us to be a leader in advanced television. Recently, we released enhancements to the TiVo user experience that will help enable quicker software deployments for our operator customers going forward as well as providing a crisper look and feel, improved whole-home capabilities and more fluid navigation on-screen. Additionally, we continue to make strides to bring the look and feel of the TiVo user interface beyond the DVR to other platforms such as non-DVR set-top boxes and tablets.

"TiVo's audience research & measurement services continue to show that advertisers remain shackled to inefficient methods of measuring viewership, but those who are working with TiVo have discovered better insights into television viewing behavior that can be invaluable in the world of on-demand viewing. To that end, we made a significant step to enhance our research product by recently licensing set-top box data from AT&T U-Verse to allow us to expand our data set beyond the TiVo subscription base, giving us the ability to also incorporate non-TiVo whole home data into our offerings. We believe this addresses the desire of certain industry players who wanted TiVo data to incorporate information beyond TiVo boxes. We believe TiVo's viewing data is indispensable, given the rise of on-demand viewing, and will be even more so with a larger sample set, and we believe that this is an area where we can drive incremental growth in the future.

"2011 saw the successful resolution of two significant legal battles for TiVo. The licensing arrangement we entered into with AT&T that will yield minimum payments of $215 million while providing for future upside as AT&T's U-Verse deployment grows. The settlements we reached with DISH Network and AT&T brings total consideration to us to more than $800 million. We are extremely pleased with both of these outcomes and believe the combined compensation underpins the enforceability of our intellectual property. Separately, we are pleased the court has lifted the stay in our case with Verizon, enabling this case to move forward, and we remain highly focused on enforcing our intellectual property as we have proven elsewhere."

Rogers concluded, "As you can see, our efforts during last fiscal year translated into a very strong quarter and year both operationally and financially for TiVo. Over the past 12 months, we successfully demonstrated the value of our intellectual property, continued to attract the interest of operators around the globe to TiVo's advanced television solutions and TiVo's total subscription number moved to a strong positive trajectory. As a result, we believe TiVo is on the right path to sustained growth in fiscal 2013 and that these developments indicate a substantially improving path to profitability in the future."

This financial guidance is based on information available to management as of February 23, 2012. TiVo expressly disclaims any duty to update this guidance.

ALVISO, CA, Feb 22, 2012 (MARKETWIRE via COMTEX) --TiVo Inc. (NASDAQ: TIVO), the creator of and a leader in advanced television services including digital video recorders (DVRs), and Pace (LSE: PIC), a leading developer of technologies, products and services for service providers, today announced plans to port TiVo's award-winning software to Pace's set-top boxes and gateways. This development will further enable operators around the world to quickly and cost-effectively deploy the renowned TiVo consumer experience to a selection of Pace devices.

"This global partnership with Pace is another step in achieving our constant goal of providing the TiVo service to an ever-expanding audience," said Tom Rogers, CEO and President of TiVo. "The integration of TiVo's advanced television software with Pace's service provider optimized platforms will allow our mutual partners to offer TiVo's best-in-class linear and broadband TV experience with their choice of hardware. This answers strong interest from TiVo's growing list of service providers deploying the TiVo experience to their customers."

Pace has licensed TiVo's Hardware Porting Kit and will work with TiVo to build a TiVo-verified platform which will provide operators licensing the TiVo solution the choice of utilizing Pace set-top boxes and gateways. To simplify operational integration and speed to market, the solution will leverage Pace's proven provisioning and device management capabilities and provide integrated high-speed data connectivity for broadband communications and content delivery.

The solution will also harness TiVo's whole-home capabilities, such as multi-room streaming and support for both traditional set-top and IP clients, including TiVo's mobile and tablet applications.

"We are thrilled to be working with TiVo as they have a great solution for operators looking to answer their customers' increased demand for advanced and hybrid TV capabilities," said Mike Pulli, CEO of Pace plc. "We've seen increased interest from all segments of our service provider business to integrate the TiVo solution. In working together, we will provide an offering which seamlessly marries the operator's television and Internet services in an elegant and easy to use product for their end users."

Pace intends to offer implementations for both DVR and advanced gateway set-top boxes globally, with an initial product to be made available to cable operators in the Americas.

In this article: att, comcast, dvr, earnings, financials, gateway, hd dvr, HdDvr, hdpostcross, ip set-top box, IpSet-topBox, multiroom, pace, q4, q4 2012, Q42012, streaming, tivo, tivo preview, TivoPreview, transcoder, u-verse, verizon
All products recommended by Engadget are selected by our editorial team, independent of our parent company. Some of our stories include affiliate links. If you buy something through one of these links, we may earn an affiliate commission.
Share
Tweet
Share