Latest in Cortex a15 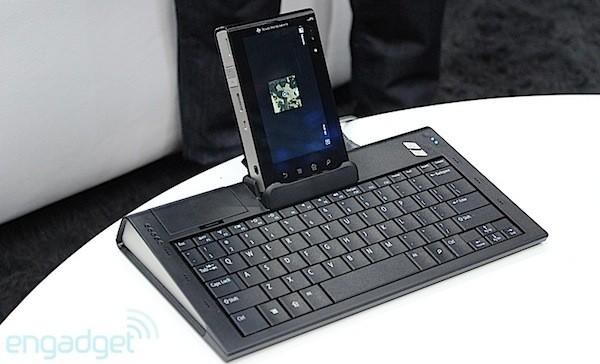 Well, if our hands-on at CES didn't sell you on TI's next-gen OMAP 5 platform, perhaps some more specs revealed recently at MWC 2012 will. We've known about its dual Cortex-A15 and Cortex-M4 architecture since this time last year, but we didn't know that those M4 cores are there to handle real-time processing of multimedia -- like video encoding and decoding -- which TI claims can provide up to ten percent power savings. Additionally, the company's wunderkind SoC will pack a dual-core PowerVR SGX544 GPU and a dedicated 2D hardware-accelerated composition engine to deliver great graphics and lower power consumption than other mobile silicon solutions. OMAP 5 also comes with a multi-tasking image signal processor that can use up to four image sensors at the same time, or take 1080p 60fps video while snapping 12-megapixel stills simultaneously. So, you ready for a super-speedy OMAP 5 chip in your next smartphone yet? Those who are still skeptical can peruse the PR after the break for a full rundown of its considerable capabilities.
Show full PR text
Texas Instruments' OMAP 5 platform takes center stage

TI's OMAP platform has long harnessed a balanced system identified as the smart multicore architecture to deliver the highest applications processing performance at the lowest possible power. The evolution of this architecture, that today comprises the OMAP 5 platform, changes what's possible in mobile computing, and delivers a superior user experience leveraging TI's mobile-optimized 28nm process. Several benefits emerge from this architecture, highlights of which follow:

Overall CPU performance: Mobile applications benefit from the distribution of interdependent activities across multiple processors to create fluid performance and fast responsiveness. However, in reality most of these applications today are single-threaded or have a dominant single-threaded task or process, and are thereby unable to partition across large numbers of CPU cores within a platform. In light of this market reality, the OMAP5430 processor includes two ARM® Cortex™-A15 cores that provide the highest single-thread performance of any ARM CPU.

Off-loading of real-time processing: Unique to the OMAP 5 smart multicore architecture is the use of two ARM Cortex-M4 cores to complement the two ARM Cortex-A15 cores. The M-class cores are appropriately assigned real-time control processing of multimedia tasks, like video encoding and decoding, freeing the main CPU cores to manage high level operating system tasks. In addition to minimizing the Cortex-A15 cores' interrupt rate, this off-loading function delivers an invaluable power savings-as much as 10 percent of the system power when encoding and decoding high definition H.264 content, for example.

Best-in-class GPUs: In a market driven largely by graphics performance, the ability to raise the bar without increasing power consumption is a competitive advantage benefitting any application's performance. The OMAP 5 platform represents several upgrades to preceding OMAP processor families, including the introduction of a second GPU. Through the use of dual-core PowerVR SGX544 GPUs from Imagination Technologies, the OMAP5430 processor outperforms the competition by up to 4x across common industry graphics benchmarks. Imagination Technologies differentiates its SGX544 cores through the use of a tile-based deferred rendering architecture, which reduces bandwidth usage and minimizes power consumption when compared to competitive solutions. TI harnesses this unprecedented graphics performance by complementing the GPUs with unique OMAP platform capabilities while running the cores at their maximum limit of 532Mhz.

"The long term partnership between Imagination and TI has resulted in many market-defining firsts. With the OMAP 5 platform, the application of dual-core, industry-leading PowerVR GPUs running at their top performance is sure to create exceptional user experiences that stand at the forefront of graphics performance," said Hossein Yassaie, CEO, Imagination Technologies.

Composition engine advantage: The SGX544 cores are augmented by still another unique OMAP architecture feature-a dedicated 2D hardware-accelerated composition engine – which can support up to 8 layers of high resolution composition without the need to go to external memory. The smart multicore system off-loads compositing to the composition engine, lowering power consumption by as much as 10x what the GPU would expend running the same eight layer composition process. This is done without passing data back to the memory, freeing the memory bandwidth for other multitasking functions.

The thermal budget: Mobile platforms are constrained to a fixed thermal budget – otherwise a device might feel too hot in a user's hand. If the processor exceeds this budget, it must be throttled. This is a process that can limit the real performance of the device. Expertly navigating this challenge to yield the ultimate performance within the mobile thermal budget, the OMAP 5 platform balances the right performance to deliver under this thermal constraint the highest possible effective MIPS, reaching upwards of 35 percent greater than the latest quad-core market solutions. Under a realistic thermal budget representing the constraints of a hand-held device, the OMAP smart multicore architecture, coupled with TI's 28nm process, delivers performance unachievable by other processors-whether they leverage the same or different numbers and types of CPUs.

"We have achieved a superior design in the OMAP 5 platform, setting it in a class all its own," said Remi El-Ouazzane, vice president and general manager, OMAP platform business unit, TI. "The market requires unprecedented performance inside of a sub-two-watt power envelope to meet device and application requirements. The OMAP 5 platform is the industry's only applications processing platform capable of delivering on that need-creating the ultimate, most exciting end user experience possible in the market's current timeframe while setting the stage for what's to come."

During MWC 2012, booth visitors will witness the OMAP5430 processor showcasing some of its advanced capabilities. These experiences will also leverage TI's WiLink™ 8.0 solution for Wi-Fi connectivity. The OMAP 5 platform in action demonstrates: