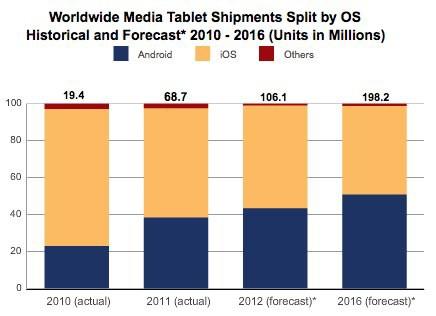 They're not center-stage right now, but Android tablets are still predicted to overtake the iPad within the next three years, according to IDC. The forecasters noted that Apple's worldwide share of the tablet market is shrinking with each new lower-priced Android competitor. Even as iPad sales continued to grow in 2011, surging 50 percent between Q3 and Q4, its market share fell during the same period, from 61.5 to 54.7 percent. That gives the iOS slate a weaker lead going into 2012 than suggested by earlier figures. Of course, the iPad remains an individual starlet in front of a troupe of Google dancers, so Apple's position as the upper-most vendor isn't under threat. In fact, IDC predicts it will remain the market leader in terms of revenue beyond 2016, which ought to put some fire in Amazon's belly.
In this article: 2015, 3g ipad, 3gIpad, amazon, android, android tablet, android tablets, AndroidTablet, AndroidTablets, forecast, idc, ipad, iPad 3G, Ipad3g, kindle fire, KindleFire, market, new ipad, NewIpad, prediction, sales, statistics, tablet, tablet market, TabletMarket, tablets
All products recommended by Engadget are selected by our editorial team, independent of our parent company. Some of our stories include affiliate links. If you buy something through one of these links, we may earn an affiliate commission.
Share
Tweet
Share