This waif of a tablet certainly took its sweet time getting here. We first laid eyes on this lightweight beauty last August and while it's also available in the US under the guise of the Excite 10 LE we've brought in the international version, which appears to be identical. On first appearances, it's an attractive sliver of a slab, due to the magnesium alloy body, of which there isn't much. Measuring in at just 7.7mm thick, we're talking RAZR-scale thinness and a 1.18 pound weigh-in that embarrasses 7-inch devices. Despite this, we still have a 1.2GHz dual-core OMAP processor, running Honeycomb 3.2 on a 10.1 inch touchscreen. But surely, sacrifices must have been made, right? Well, it looks like it's a financial cost that has to be paid. The 16GB version is currently on sale for £399, matching the new iPad in the UK, and on sale in the US at $530, pricing itself quite a bit above existing, similarly specced Android favorites like the Galaxy Tab 10.1. Are you willing to pay a fair chunk of change extra to skim a few millimeters off your tablet profile? Is it worth it? The full story is right after the break. 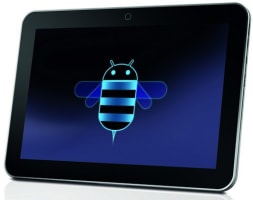 We're not sure if it was a struggle to cram the mid-range tablet specification into such a featherweight frame, but it's almost like it's bursting at the sides.

Toshiba's new Honeycomb tablet seems completely at odds with company's 2011 family. As lame and plain as the Thrive family seemed, the AT200 is cool and sharp in equal but opposite measure. Weighing in at 535 grams (1.2 pounds), as 10.1-inch tablets go, it's the most comfortable we've found for one-handed use. Augmented by that wee profile, you can just about type in vertical orientation. While it feels incredibly light, it remains solid, with barely any give, presumably due to the metallic backing. However, the build quality is flawed. The outer rim along the back side of the tablet has a nasty sharp edge -- we ended up gingerly handling the thing as it walked a fine line between skin-cutting sharpness and discomfort. The magnesium alloy frame excuses minor scuffs, although our review model -- presumably mint -- arrived with some significant grazes.

We're not sure if it was a struggle to cram the mid-range tablet specification into such a featherweight frame, but it's almost like it's bursting at the sides; the top edge has an odd little hole that looks like it should be hidden under the Gorilla Glass-coated screen. It's as if the tablet needed a little more tightening or a re-press to ensure everything was in the right place before it left the factory.

The sides of the tablet have a metallic piping that both helps make the tablet less anonymous but also help gain purchase when it's lying on a flat surface. This is interrupted on the right side by a power switch, volume rocker and customizable switch that can mute the tablet or lock the screen orientation. Some other options, like a WiFi switch, or possibly a power-saver mode would have been nice, but at least there's an option. Connectivity-wise, there's a hulking power connector on the bottom edge, which satisfyingly connects to the similarly chunky power cord, while the micro-USB HDMI output, headphone ports and microSD slot are lined up on the left side.

It's nice to see some easy-to--access ports here and while the tablet will be available in 16GB and 32GB sizes, microSD expansion means there should be more than enough space for anyone looking for a tablet with a media-playing focus. This is augmented by stereo speakers on each side of the power connector -- stereo sound remains a feature that doesn't make it to even the very latest top-drawer tablets. Located just off the left and right corners, we never seemed to cover them up when we held the tablet. As they're on the edge, sound isn't even muffled if you rest the device on a surface. Sound is just about loud enough, if a little light on the bass, although a third-party equalizer app can fix this.

The AT200 has a 1280 x 800 resolution display that matches the likes of the Galaxy Note 10.1 and the Iconia Tab A200. It's an IPS display, which means off-angle viewing shouldn't trouble the AT200 -- and it largely doesn't. However, whatever technology Toshiba is using for the touchscreen has left a visible tattoo across the 10.1-inch display. It's especially pronounced when we were in strong lighting or on dark backgrounds.

While tablets certainly don't live and die by their camera performance, it's always nice to have an extra option -- and the opportunity for a video chat. There's a primary 5-megapixel camera on the rear, while a front-facing 2-megapixel camera gives better self-portraits than the standard VGA modules we're used to. The main camera offers pretty typical tablet camera results -- that is, noisy stills that often lacked the color of their real world counterparts. The camera app is cheerfully stock Honeycomb, meaning it was easy to get to the settings we wanted to change, but a lack of touch-to-focus let it down during our tests.%Gallery-151278%

The camera is also capable of up to 1080p video, which was generally sharp and while colors and light adjustment is pretty good, it's another tablet lacking when it comes to autofocus.

While Toshiba promises 12 hours of use, we weren't able to eke out such heady figures. In our battery rundown, looped video, at 50 percent brightness with WiFi on, the tablet scraped in at just under six and a half hours. More typical use didn't inspire much confidence either. We found ourselves regularly plugging in for a top-up later in the day. Perhaps in slimming down to this 0.3-inch frame, the device has generated some power management inefficiencies, or more simply; the battery is simply too small.

On paper, the tablet flits between beating and getting beaten by rival models. However, this doesn't tell the full story: the dual-core tablet seemed heavily taxed when we used the camera app, more intensive gaming apps and media playback. While browser performance was respectable, there was often tiling on the web browser and attempting to stream media would often kick us out to the home screen or take a fair bit of time getting to the point where we could watch it.

Yep, we're still on Honeycomb. Anyone that's used its replacement, Ice Cream Sandwich, knows that it manages to solve and improve on so much of what went wrong with earlier versions of Android. Toshiba's given us version 3.2 here and it's largely what you'd expect from the now outdated tablet version. At least it's the same undiluted stock Honeycomb experience that Google gifted to the Motorola Xoom, aside from a handful of inconsequential apps that were soon sidestepped. The stock Android keyboard is here, as is Swype, which is thoughtfully thrown in gratis. We had no qualms installing our own favorite keyboard once we started using the tablet and as with most 10.1-inch devices, one with a split keyboard worked the best.

Toshiba's given us Android 3.2 here and it's largely what you'd expect from the now outdated tablet version. At least it's an undiluted stock Honeycomb experience.

The user experience is responsive, although as mentioned in the performance section, throw in something a little more complicated than lightweight apps and email and you begin to see the cracks -- typically longer load times and repeated kicks back to the home screen, There's also some larger problems circulating inside this troubled tablet. Trying to get our sample videos and photos out from the AT200 proved to be very difficult, with files seemingly corrupting irrespective of whether we shared through Dropbox or uploaded to our own Google Plus account. We were unable to detect the tablet connecting through the micro-USB port. On the software side, Android's dedicated tablet apps are not exactly bursting out of Google Play and the average quality remain noticeably lower than its Cupertino equivalent.

The AT200 is a beautiful tablet. With some great build materials and almost unbelievable lightness in the hand, it embarrasses Toshiba's previous attempts at Android tablets. However, it feels unfinished. Those rough edges, the uneven spacing along the seam -- it all adds to a growing dissatisfaction with this final retail model. This is exacerbated by last year's tablet software, especially when (much cheaper) tablets are arriving with Ice Cream Sandwich right out of the box. Toshiba's severely misguided pricing not only puts it above the market-leading tablet -- which very recently undertook a substantial hardware refresh -- but also above technically superior Android rivals, like the quad-core, higher resolution Transformer Prime. Are you willing to pay $30 more for a lesser product with some performance issues? No matter how good it looks, we're not.