T. O'Brien
@TerrenceOBrien
November 7th, 2011
In this article: android, android 2.3, android 2.3.5, Android2.3, Android2.3.5, droid razr, DroidRazr, gingerbread, google, lte, mobilepostcross, motorola, motorola droid razr, MotorolaDroidRazr, razr, review, reviews, verizon, verizon wireless, VerizonWireless, video, vzw
The RAZR brand has a long and storied history, starting in the halcyon days of 2004. Back then it was a premium line -- set apart from the crowd by its extremely thin profile and aluminum construction. Shortly after launching as an expensive status symbol, Motorola chopped the price and turned the V3 into one of the best selling handsets ever. In the years that followed there were countless revisions, colors and would-be successors that ultimately turned the once-hyped product line into a euphemism for obsolete technology.

Motorola has certainly had success since, particularly with the iconic Droid and Droid X, but alas, the Droid stamp belongs to Verizon. To once again make the name Motorola synonymous with cutting-edge tech, the company has returned to the well and resurrected the RAZR name. Has Moto managed to reclaim the magic and mystique of the V3, which had many a gadget hound coughing up some serious dough upon its initial release? Or is the Droid RAZR a successor in title only, more akin to the ill-fated MOTORAZR maxx? Keep reading to find out.
%Gallery-138583%
Motorola
0
SCORE
Engadget
N/A
Critics
7 reviews
77
Users
21 reviews
85 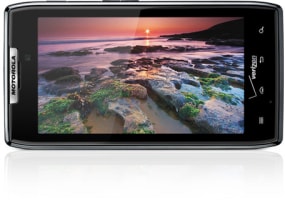 To say the Droid RAZR is thin doesn't do it justice. At only 7.1mm thick it's almost unbelievably svelte. Heck, the Galaxy S II, which impressed us with its sleek physique just a few months ago, measures a comparatively beefy 8.49mm. The RAZR does bulge out at the top to about 10.6mm around the 8 megapixel camera, but that's hardly enough to make the handset cumbersome. Besides, the hump is the only place with enough room to house the headphone, HDMI and micro-USB jacks. Along the right side you'll find all of the physical buttons. The textured power key sits roughly an inch above the rather flimsy volume rocker, which has almost no travel. The bottom of the handset is unadorned, but the left edge conceals the Micro SIM and microSD slots under a door that's more than just a little tough to pry open. The RAZR ships with a 16GB card pre-installed, a nice complement to the 8GB of internal storage.

Handsets simply don't get much more premium-feeling than the Droid RAZR.

The shell of the phone is a stunning mix of aluminum, Kevlar and Gorilla Glass. Handsets simply don't get much more premium-feeling than the Droid RAZR. It may be extraordinarily light, but there's just enough heft to reassure you it won't shatter into a few dozen pieces on the first drop (though, we make no guarantees about the second or third). Good thing, too, since the synthetic fabric backplate is very slick, which makes it quite easy to get in and out of even your tightest jeans, but could make for a few accidental spills. Our one and only complaint is the sizable bezel. The fortified glass panel alone is the size of a Droid X, and that extra millimeter or so of width is just enough to make reaching across the screen with your thumb uncomfortable.

Motorola RAZR open for unlocked bootloader business, if the carrier says so
Motorola RAZR to get updated to Ice Cream Sandwich in early 2012
Motorola Droid RAZR hits FCC with Verizon LTE, global GSM radio
Towards the top of that slab of glass is a 1.3 megapixel camera for video chats, which stands out oddly thanks to the small square of transparent glass that interrupts the otherwise stark black bezel. Underneath the mirror-like sheet of Gorilla Glass is a 4.3-inch 960 x 540 qHD Super AMOLED Advanced panel. How exactly it differs from Super AMOLED Plus isn't clear, but we do know that it does away with the controversial PenTile matrix. (Update: There seems to be some confusion as to whether or not the screen sports a PenTile matrix, we're waiting on clarification from Motorola and will update when we hear back.) (Update 2: Despite initial reports to the contrary, it appears that the RAZR is, in fact, sporting a PenTile matrix display.) We didn't have any major complaints about the display, but it didn't quite live up to our expectations either. It was sharp, contrasty and bright enough to satisfy, but had a slight green hue that was very apparent at lower brightness settings. It also couldn't match the brightness produced by the old-school TFT LCD on the Droid X or the IPS panel on the iPhone 4, though, its contrast levels were noticeably better.

The RAZR also has more accessories than you can shake a fine print-laden two-year contract at. We didn't get any in time for our review, but the two main attractions are the Lapdock 500 and Lapdock 100. These laptop-style docking stations (14- and 10-inches, respectively) turn the RAZR into a portable (if underpowered) computer running Webtop.

The TI OMAP 4430 inside the Droid RAZR isn't the most cutting-edge mobile processor on the market, but its dual 1.2GHz cores should be enough to satisfy even the most demanding smartphone nerds. Gingerbread 2.3.5 and the extremely flashy don't-call-it-Blur hum along relatively smoothly. We encountered a few odd hiccups and stutters, primarily while placing and resizing widgets, but we'll chalk that up to Moto's liberal use of 3D animations. For the most part, though, transitions were smooth, navigation was speedy and apps were plenty responsive.


Benchmarks didn't turn up many surprises. The RAZR notched an average of 2,798 on Quadrant, which puts it a bit behind the Galaxy S II, but ahead of the 1.5GHz Snapdragon-powered Amaze 4G. Moto's sleek handset and the S II essentially traded victories, with the latest Droid beating Sammy's flagship on the multi-threaded Linpack test (but not the single-threaded) and eking out a triumph in Neocore with 59.98 fps to 59.8 fps. But it lost the Nenamark 1 battle, pulling off just 50.34 fps, while the S II managed 59.8 fps. The one shock the phone had in store for us was blowing through SunSpider in just 2,140ms, putting it well ahead of most of the Android pack and even besting the iPhone 4S, which averaged 2,200ms. And that's great news since you'll want your browser to chew through code as fast as possible to take advantage of the RAZR's blazing LTE radio. In our limited testing, we averaged just a hair shy of 19 Mbps down and 6.5 Mbps up.

Motorola promises that the non-removable 1,780mAh battery will deliver up to 8.5 days of standby time and 12.5 hours of talk, but it survived just five hours and one minute in our battery rundown test. In our less scientific testing we managed a full day of moderate use. After an afternoon of browsing the web, syncing our data and placing a few phone calls, the RAZR was still going relatively strong, only dipping below the 15 percent mark as we approached midnight. Under light usage you may be able to squeeze two days out of it, but most likely you'll need to plug it in every night before you go to bed. If you're the type who really pushes their phone to the limits, we suggest you pack the charger -- without a removable battery you'll be stuck when the integrated power pack gives up the ghost.


The camera in the RAZR is quite similar to that found in the Bionic. Both are 8 megapixel shooters capable of capturing 1080p video with a single LED flash and they produced very similar results. Pictures taken outdoors in broad daylight were decent, though the colors were a little muted. While indoor shots under artificial lighting were acceptable, you could easily detect some noise in the images without the flash. The phone actually takes surprisingly good macro shots, allowing us to get up close and personal with our keyboard and a flower (before the winter chill snuffs them all out). It was quite easy to fire off shots in quick succession thanks to the very short shutter lag, but the autofocus couldn't keep up with our taps and often had trouble zeroing in on its target.
%Gallery-138588%
Video performance was certainly above average. The 30-second 1080p clip we captured was compressed down to a surprisingly miserly 59.3MB, but the video still looks relatively crisp. Color reproduction was good and it managed to capture a decent amount of detail in the shadows. The camera has an image stabilization feature which is far from perfect, but certainly makes video captured by some of our more shaky editors less nausea-inducing. The pair of mics can also be switched between several different configurations, the most useful of which is "wind reduction" -- for canceling out extraneous noise when you're narrating from behind the lens.

Like most Android skins, Motorola's tweaks are a love-it-or-leave-it affair. It's not quite as intrusive-feeling as Sense, but if you're a fan of vanilla Gingerbread the customizations will leave you feeling cold. Sadly, where we found the Not-Blur shipping on the Photon 4G and X2 to be pleasantly restrained, the RAZR is more akin to the Bionic and loaded with gaudy animations that distract from -- rather than add to -- the Android experience. Linux users may spot a few similarities between Compiz and the wobbly widgets and zoomed out wall of home screens on the RAZR. Still, the OS is instantly recognizable as Android, and, outside of the overzealous use of superfluous eye-candy, it sticks to all the Gingerbread paradigms you're used to.

There are, of course, some carrier and manufacturer apps loaded on the handset, many of which fall firmly in the crapware category. But, a few are welcome additions to the standard Android setup. Some of the pre-installed apps can easily be uninstalled, like Blockbuster and Let's Golf 2, but those specifically bearing the Verizon or Motorola brand cannot. Like many of its Moto siblings, the RAZR comes loaded with QuickOffice, Citrix and MOTOPRINT, but the real standout, and new kid on the block, is Smart Actions. Similar to Tasker, Smart Actions lets you choose a set of rules that trigger particular actions. Motorola is primarily pitching this as a way to extend battery life, but it's loaded with possibilities. It can do anything from turn off the ringer and data syncing at a certain time of night, to send out a text message whenever you're in a particular neighborhood (great for those friends and family members who complain you never visit).

So has Motorola succeeded in reclaiming the prestige that once belonged to the RAZR brand? Unequivocally, yes -- the handset is just physically stunning. It's thinner than almost any phone on the market and makes no sacrifices to attain its slim physique. It's solidly constructed from premium materials like diamond-cut aluminum, Gorilla Glass and a sheet of super-slick Kevlar. Few phones out there can even be put in the same category when it comes to build quality. It's not the most ergonomically sound handset on the market, but for those who cherish form over function (the very targets of a so-called fashion device), that's a sacrifice worth making.

Don't get us wrong -- the RAZR's beauty is not only skin deep. The LTE radio, 1.2GHz dual-core processor and 1GB of RAM make sure this sleek number is ready to run with the big boys. It kept pace with, and in some cases clearly outclassed its high-end competition. Despite its deficiencies in the display department and underwhelming battery life, the RAZR looks to be a perfectly viable alternative when considering the similarly-pricey Rezound and Galaxy Nexus, but we'll have to wait for our full reviews of those devices to say for sure. And don't forget: this one will only get better when ICS comes to Moto's slim slab of sexy.