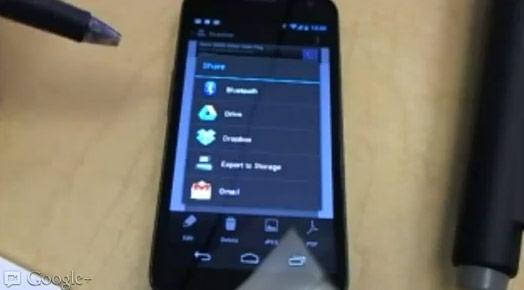 To close out each week, the Android Developer Relations team hosts a Friday App Review video. This Friday, however, the focus is far from whatever apps are being showcased (psst... it's Handy Scanner); instead, all eyes are on the Share to 'Drive' option, seen just below the 'Bluetooth' logo in the screen capture above. It's shown at the 32:53 mark in the video just after the break, and while this certainly isn't confirmation that Goog's own cloud storage service will be hitting the masses soon, it's one of the more tangible pieces of evidence that Google Drive is at least a real initiative. Come to think of it, we've got a couple of passes to Google I/O 2012, which just so happens to get going in around two months. Anyone else feeling that tug of puzzle pieces coming together?

In this article: android, android 4.0, Android4.0, app, cloud, cloud storage, CloudStorage, drive, galaxy nexus, GalaxyNexus, google, google android, google drive, GoogleAndroid, GoogleDrive, ice cream sandwich, IceCreamSandwich, mobilepostcross, nexus, storage, video
All products recommended by Engadget are selected by our editorial team, independent of our parent company. Some of our stories include affiliate links. If you buy something through one of these links, we may earn an affiliate commission.
Share
Tweet
Share