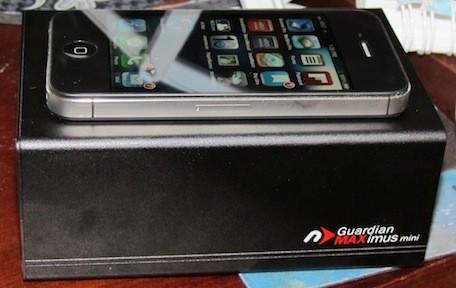 Newer Technology produces a wide variety of storage solutions for the Mac OS X world, and one new product is sure to be popular with anyone who needs the security of RAID storage in a portable package. The Guardian MAXimus mini is a rugged pint-sized RAID box using a pair of 2.5" SATA hard disks or solid-state disks to provide RAID-1 mirroring for mobile Mac users.

The design of the Guardian MAXimus mini is what I've come to expect from Newer Technology. The storage solution features a rugged aluminum case measuring about 5.25" deep, 3.5" wide, and 2" high. On the front of the case is a backlit 2-line blue LCD and a set of tiny buttons that are used to check the status or change the settings of the array. There are also a set of LEDs to indicate activity and status of the two drives.

The review array came with two 7200 RPM Hitachi 500 GB drives installed in a RAID-1 mirrored configuration. For maximum storage, the array could be configured as a 1 TB RAID-0 striped set. On the back of the unit are two FireWire 400/800 ports, a USB 2.0 port, and one eSATA port. When connected to a Mac via FireWire 400/800 or USB 2.0, the array is bus-powered and doesn't require external power. If you're using eSATA, you'll need to either plug in the included AC adapter or use a FireWire cable for power. Using FireWire 800, you can daisy-chain a number of the arrays for ultimate portable storage. Cables for all three interfaces are included.

Changing out drives requires a standard Philips screwdriver to remove two screws on the back of the case. Once those screws are removed and a small door is opened, the two drives are visible and easily accessed.

TUAW uses a standard industry benchmark to compare the I/O capabilities of disks and arrays. The benchmark uses the AJA System Test, which simulates reading and writing video. The specific test I used was the Disk Read/Write test, also known as the DiskWhackTest, set at a video frame size of 720 x 486 8-bit and a file size of 128 MB.

I tested the array in both RAID 1 and RAID 0 configuration. The test results are compared to the internal SATA drive of the test iMac. What's odd is that the RAID 0 configuration (striped set) is supposed to be faster than the mirrored set. At least in the testing I performed, RAID 1 was faster -- particularly in writing to the drive where it was almost twice the speed of RAID 0.

Compared to some other FW 800 drives and arrays I've tested, the Guardian MAXimus mini in mirror mode was slightly slower in writing data but one of the fastest I've encountered in reading data.

For those who use Apple's MacBook Pro or MacBook Air notebooks in their daily work, the Guardian MAXimus mini is a perfect redundant storage companion. Being bus-powered means there's no need to drag along another power supply, and the RAID 1 capability provides a complete backup of your data at all times.

Personally, I'm thinking seriously about purchasing a pair of these little arrays to replace a much larger and more problematic array in my office. The Guardian MAXimus mini won't take up as much space, won't require a separate power supply, and will certainly be much quieter. The small size means the array can also travel with me, useful for trips where I need high-capacity and relatively fast storage for video work.

With the pricing, design, and performance of the Guardian MAXImus mini, Newer Technology has unleashed another winner product on the world.

In this article: eSATA, features, FireWire, Guardian MAXimus mini, GuardianMaximusMini, Newer Technology, NewerTechnology, RAID, review, USB 2.0, Usb2.0
All products recommended by Engadget are selected by our editorial team, independent of our parent company. Some of our stories include affiliate links. If you buy something through one of these links, we may earn an affiliate commission.