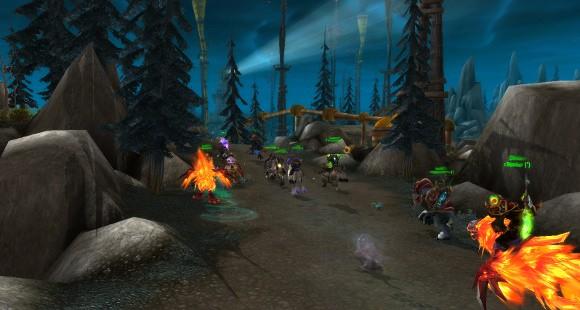 WoW Insider covers the world of player vs. player action in Blood Sport for fans of Battleground, world PvP and Arena play. Steering you to victory is Olivia Grace, who focuses on making with the stabby and turning people into frogs.

Focus in PvP can have a few meanings. If you're tired, or a bit stressed out, it's something you can lose. Trust me on that! Your focus can also be the target you pick to burst down or of course your main objective -- and lastly and principally for this column, focus is a secondary target.

A secondary target? Didn't you just say it was the target you pick to burst down? Well, I may be teaching my grandmother to suck eggs here, so bear with me. We all know how to select a target, I assume, but you can also have another target set in addition to your main target. Depending on your UI setup, this will appear in various places on your screen. Some UIs and addons are more customizable than others with regard to a focus target, and for all the screenshots in this post, I use a tailor-made edit of TukUI.

So a focus target is another target? Yup. Why would you need another target? Well, we'll get to that! Patience, young padawan. One basic use for focus includes doing Battlegrounds with friends. As long as you have the map set up to allow it, your map displays your focus target with a thick ring highlighting their position. If you head into a Battleground with a buddy, you might want to set them as a focus so you can see where they are and help them out!

Personally, I use focus targets mainly for macros and for healing. What on earth am I talking about? Well let me explain.

Setting and using a focus target

How do you set a focus target? Well, one way is to get a target, then right-click it and hit Set Focus. You can also target something and type /focus into the chat box. But in PvP, when you often need to do this in a hurry, this is a slow and unwieldy method. Gladius (probably along with other addons) allows you to click a unit in an opposing Arena team to target them, then right-click to focus them. This is a really great function!

But Gladius doesn't work in Battlegrounds. So it's good to have a keybind or a macro to set this up. I recommend a keybind; it's really easy to do within WoW's normal interface and doesn't take up a space on your action bars. How? Hit escape or click to go into the game menu, then hit Key Bindings. You're looking for Targeting Functions, and depending on how many addons you have installed, it might be anywhere in the list. You're looking for this section, and you'll see how I've bound just Focus Target.

That means that whenever I hit the button I've bound it to (the one above Tab and to the left of 1, if you're curious), the unit I have targeted will become my focus target. Target focus does the opposite -- it takes the unit you have focused and makes it your target.

There are so, so many different uses for a focus target. You can use them in 2v2 to have both your opponents focused and see who they're targeting, since you can set the UI up to see both your target's target and your focus's target (which as a healer is great). You can use them to have two targets that are quickly interchangeable -- I'll show you a macro below -- but the biggest use for a focus target is macros.

So here, for example, I've got a paladin targeted and a druid focused, and I can see that the druid is targeting a warlock.

What is a macro? Great question. A macro is basically a simple script that you bind to a button press or click that allows you to cast either a set of spells or a sequence of spells or a single spell. You can set various conditions to modify that macro. In order to access your macro panel, type /m or /macro into chat. Macros in the General Macros section will be available to all your characters, while those in the [character name]-Specific Macros will only show up for that character.

So, for example, this macro:

Clearly, you can see it is for the shaman CC, Hex. The #showtooltip line at the top? It means that when I hover my mouse over the button I've put this on, it'll show the tooltip for hex. It then tells the game to /cast, which should be pretty clear, but it checks first if the target is harmful by assessing the condition [harm]. If the target is harmful (which means it's an enemy), it will use that condition and cast Hex on my target. If, however, I have an ally targeted, the [harm] condition is not met, so it will then move to the second condition, [@focus], and cast Hex on my focus.

It's also possible to set a modifier so that, for example, you can make a macro like the following:

The eagle-eyed reader will have also noticed that there's a line I've snuck in, the /stopcasting line. As the wording suggests, this makes you stop casting! So if you're right in the middle of a long cast and you need to urgently Polymorph someone, you hit this macro, with or without your modifier, and it stops your long cast and Polymorphs the relevant enemy.

Now, I'm kind of hoping that at this point, you've suddenly begun to realize the world of possibilities that focus targets open up! There you are in a Battleground, and you've spied an enemy healer and set them as focus. You're a warrior, and you're making with the smashy on your current target -- then you see that your focus, the healer, has begun casting. Oh, no! But that's OK, because you've got a focus charge macro.

You hit that macro, holding alt down -- and all of a sudden, that unsuspecting healer has a face full of warrior and a cast interrupted by the stun. This macro also cancels your Bladestorm.

Healing macros are a minor obsession of mine -- just ask my PvP partners! I heal with keybind macros in 2v2 and 3v3 and with a mixture of click targeting and keybind macros in 5v5 and Battlegrounds (apart from the big ones, where I confess to using Healbot).

What does it do? Well, I will have two enemy targets. For this healing style, this is important. The macro is bound to E, so if I hold alt+E, it casts Greater Healing Wave on party member 1. Shift+E casts it on party member 2, and if I just push E, it casts it on me. One thing I'll often do when I'm PvPing with the same people a lot is replace @party1 with their name, so it'd say @myfriendbob. Then, when I hold alt+E, it will cast the heal on the character Myfriendbob.

Why is it important not to have a friendly target? If you do, this macro will cast all your heals on that target. I'm not sure why, but it will. So I use aggressive macros such as we mentioned earlier on my targets.

When I'm in 5v5 or more, I will often still have the above macro active with names, so I can still heal like that if I want to keep a melee Frost Shocked, for example, while having a healer focused for CC and interrupts. However, I'll also click target, so sometimes my target will be friendly. As mentioned, this overrides the macro above, so I'm casting all my heals onto that friendly target.

I'm messing around with self-cast modifiers too. It's great to always be open to changing your style.

This macro works for DPS and healing and is very handy indeed! I'm not going to explain each line, but suffice it to say that it swaps your target and focus in one button press. ... Like, woah.

I'm always looking for new macros and macro ideas. If you have any macros or a favorite macro to share, please definitely post in the comments! Your macro could be the exact one that someone is looking for. ArenaJunkies has some great ones in the macros and forum section of the site.

Do you want to capture flags, invade cities, attack towers, and dominate the enemy for your faction? Do you dream of riding your War Bear with pride? We'll steer you to victory with secrets of Battlegrounds and Arena, prepping you with proven addons and keybindings that win! Send questions or comments to olivia@wowinsider.com.
In this article: arena, arena-guide, arena-macro, arena-macros, arena-strats, arena-tips, arenas, featured, focus, focus-target, guide, healing-macro, how-to-play-battlegrounds, how-to-pvp, interrupt-macro, macro, pvp-focus, pvp-guide, pvp-macro, pvp-macros, wow-arena, wow-arena-guide, wow-guide, wow-macro
All products recommended by Engadget are selected by our editorial team, independent of our parent company. Some of our stories include affiliate links. If you buy something through one of these links, we may earn an affiliate commission.