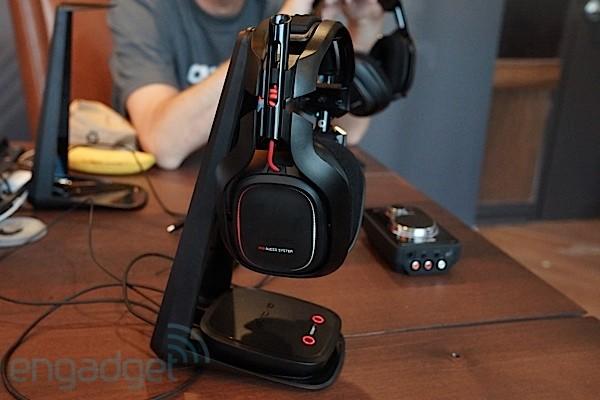 If you're serious about your sound when it comes to gaming, chances are you've at least heard of Astro Gaming. Back in 2008, the company introduced its pro gaming-focused headset solution, the A40 audio system, and since then it's been actively adding to its lineup with lifestyle headsets like the A30, and various improved refreshes of the A40 itself. In the lead-up to E3, the company announced the $300 A50 wireless audio system, marking its second major push away from the competitive gaming scene and into the living room. If you'll recall, Astro first dabbled in specifically bringing its tournament headset chops to the living room last year with its first wireless solution, the MixAmp 5.8.

Although we were pleased with the 5.8's performance and versatility -- namely that it worked with any 3.5mm-equipped headsets across the Xbox, PS3 and PC like the wired MixAmp Pro -- we worried some users would be put-off with having to deal with the three-piece setup. Basically, you had a wired headset that plugging into a belt pack, which wirelessly connected to a transmitter base. It appears that Astro took note as well, opting to get rid of the belt pack and cram its controls and radios inside of an A40, along with some other tweaks, including KleerNet lossless audio, to create the A50 -- something we'd been hoping to see for a very long while. We spent some time with Astro's Marketing Director, Aaron Drayer, to talk about the headset and try it for ourselves, and you'll find it all detailed just past the break.

Although this is Astro's first embedded wireless gaming headset solution, it should be mostly familiar to anyone who has used the A40. The headsets are nearly identical from a distance, aside from the A50 having a red trim on its inner cabling and more matte accenting. The materials on both headsets are mostly the same as well, save for the headband which has extra padding. Naturally, it's because the A50 is a bit heavier from now having all the MixAmp tech jammed inside of its earcups. Still, the headset pretty much has the tried-and-true comfort and fit that the A40 is known for -- something that's only rivaled by that of the Sennheiser PC 360 to our heads.

Among the main things that've changed, the earcups don't support removable speaker tags and are now of the closed back variety, offering better isolation and bass response. Furthermore, the noise cancelling boom mic is nearly the same as the A40's, but it's now non-removeable and affixed to the left earcup. This allows it to function like the PC 360's boom mic, whereby muting is handled by simply flipping the boom upright instead of an inline mute switch like the A40's. Moving along, the lower rear edge of the earcup houses a Xbox 360 chat cable port and Mini-USB for charging the unit's battery. Estimated battery life is slated for 10-12 hours per charge, with an average lifespan of over three years. We're told a service replacement program will be offered if the battery dies out, as it's not user replaceable. The headphones also packs a 5.8GHz KleerNet-equipped wireless radio, which is said to be compatible with newer HP Beats-enabled laptops out of the box.

The right earcup is where the MixAmp magic takes place. Rather than having the MixAmp's balance dial for chat and game volume, the earcup is now a two-way rocker switch. Pressing forward gives you more game volume, while pushing back mixes in more voice volume. Thankfully, audio cues are given to inform you when you've maxed out in either direction or set the two to an even balance, however, we do wish there was a beep for every increment. If we had to nitpick, the rocker makes a bit of a hollow wom sound when pressed, but it does have a nice tactile click to it when pressed. The rear edge of this cup features a click-wheel for the overall volume, as well as a three-way audio preset switch (details in a bit). The wheel's position made it lineup our thumb, making it easy to adjust volume quickly. Better yet, there was absolutely no static while adjusting it unlike previous MixAmps.

The three-way switch we mentioned is another first for Astro headsets. Out of the box, it has a Pro mode for shooters with toned down bass and enhanced highs, a Core mode mixed for a flat response and a Media mode that adds extra bass and mids for movies and music. Like Turtle Beach's programmable headsets, Astro plans to offer software so that users can make custom presets down the line.

You're might still be confused as to how sound gets to the headset itself. The unit has a transmitter base that's functionally similar the MixAmp 5.8 TX, but it can only connect to A50 headsets because the 5.8 RX belt packs don't use KleerNet lossless audio processing. It's a bummer for those with A40 and A30 wireless systems, but understandable given that newer DSP is at play. The transmitter features an optical input with a pass-thru for your other home theater gear, a 3.5mm aux. input for chat connection to the PS3 or a music line-in with the Xbox 360, USB ports for charging and potential accessories, along with an input for a power cord. On it's top there's a button for power and Dolby Headphone switch for toggling between stereo and surround sound. By the way, the plastic stand shown is included to cradle headset for charging and storage while also holding the transmitter base. Conveniently enough, it can also hold a MixAmp Pro, but there's no word on when it'll be offered as a standalone accessory.

A quick round of Call of Duty let us test out the sound in Pro mode, and unsurprisingly, it essentially sounds like an A40 with more isolation and added warmth. The Dolby Headphone-enabled virtual 7.1 gave us a good sense of the battlefield around us, and we didn't feel as though the soundstage was drastically affected by the closed back earcup design. If anything, we felt more immersed since we were fairly isolated from everything around us. We didn't notice any crackling or distortion either cranking the headset's volume up, which is notable as Astro claims this headset is its loudest yet. Overall, the A50's smooth and punchy voicing seemed very suited for the task at hand. As far as the microphone is concerned, we couldn't gauge how it would sound to others, but the MixAmp-supplied voice monitoring is actually useable this time around. In past MixAmps the feature was distorted and barely audible, but now it's clear enough that would could talk without shouting despite all the noise-isolation from the ear cups.

The A50 audio system is set to hit pre-order status in about two weeks, priced at 300 bones, with the first shipments set to hit doors in July. Rest assured that we'll bring you our in-depth impressions once we get a unit in for review in the coming weeks.

In this article: 5.8, 5.8ghz, a50, a50 audio system, a50 wireless headset, A50AudioSystem, A50WirelessHeadset, astro, astro design, astro gaming, AstroDesign, AstroGaming, dolby headphone, DolbyHeadphone, gaming headset, GamingHeadset, hands-on, kleernet, mixamp, mixamp pro, MixampPro, pc, ps3, stereo, video, wireless, xbox
All products recommended by Engadget are selected by our editorial team, independent of our parent company. Some of our stories include affiliate links. If you buy something through one of these links, we may earn an affiliate commission.
Share
Tweet
Share