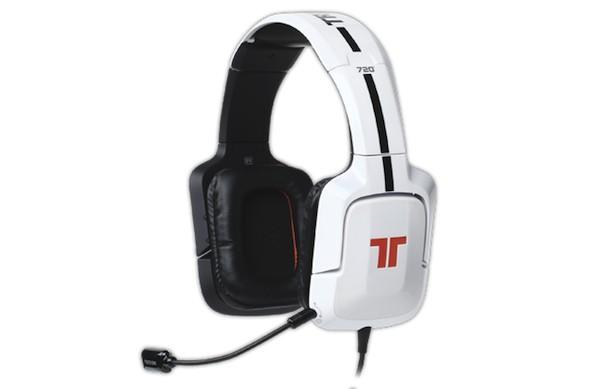 Lately, it seems like few weeks go by without Tritton announcing a new gaming headset. Now that its full range of Xbox-licensed cans has reached shelves, the company seems focused on updating its former corded stars. Following the recently announced Ax Pro+ "true 5.1" headset ($200), Tritton has unveiled the 720+ 7.1 surround sound headset ($150) -- the successor to the venerable AX 720. Aside from sporting the Pro+'s edgier aesthetics, the 720+ has been gifted with beefier 50mm drivers (up from 40 on the 720) for improved fidelity and the same selective microphone monitoring found on the Warhead. As expected, an included Dolby decoder box handles the audio processing and connections, while an inline remote lets you set your levels. Rather than having multiple drivers dedicated for each audio channel crammed in both earcups like the Pro+, the 720+ takes a virtual route with Dolby Headphone -- a method that's generally produced better results to our ears for owning, and clearly hearing the virtual battlefield. The 720+ is set to arrive this September, and it's currently up pre-order direct from Tritton.

Mad Catz Interactive, Inc. ("Mad Catz") (NYSE MKT: MCZ) announced today the TRITTON 720+ 7.1 Surround Headset, the upgrade to the Company's TRITTON AX 720 Headset. Compatible with both the Xbox 360® video game and entertainment system from Microsoft and the PlayStation®3 computer entertainment system from Sony®, the TRITTON 720+ 7.1 Surround Headset is expected to ship in September 2012.

The 720+ features a number of key enhancements designed to offer superior performance and sustained comfort. All new Neodymium drivers have increased in size from 40mm to 50mm resulting in improved bass response and audio clarity. Featuring the latest Dolby Headphone technology, the 720+ delivers rich 7.1 Surround Sound, ideal for pinpointing in-game enemy movements or for enjoying movie blockbusters. In addition, the 720+ features Selectable Voice Monitoring (SVM), allowing users to choose to hear their own voice through the headset. Sporting a lightweight and flexible design, the 720+ has been designed for extended playing sessions and comes replete in an eye-catching gloss white finish.

"Following our recent announcement of the Pro+, we are pleased to continue upgrading our range of TRITTON headsets with the announcement of the 720+. We expect the 720+ to be a key product in our range as we continue to grow our portfolio and market share within the headset sector." said Darren Richardson, the President and Chief Executive Officer of Mad Catz. "We believe the enhanced features and upgraded design of the 720+ further demonstrate our commitment to offering market leading product which appeal to the passionate gamer."

Additional information and purchase options are available at: www.trittonaudio.com/720plus

In this article: 7.1, 7.1 surround sound, 7.1SurroundSound, 720 plus, 720+, 720Plus, ax 720, ax pro, Ax720, dolby digital, dolby headphone, dolby surround sound, DolbyDigital, DolbyHeadphone, DolbySurroundSound, gaming headset, GamingHeadset, mad catz, MadCatz, tritton 720 plus, Tritton720Plus, virtual surround sound, VirtualSurroundSound
All products recommended by Engadget are selected by our editorial team, independent of our parent company. Some of our stories include affiliate links. If you buy something through one of these links, we may earn an affiliate commission.
Share
Tweet
Share