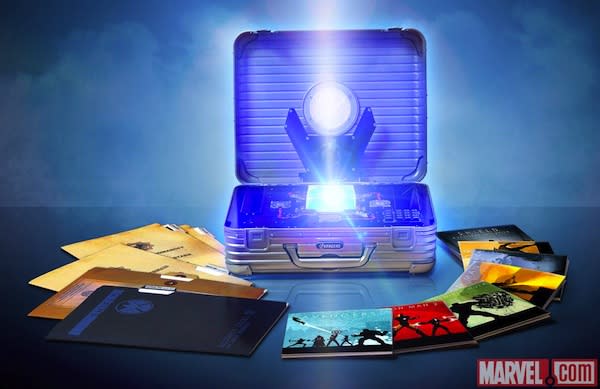 Remember that $139 Marvel Cinematic Universe: Phase One - Avengers Assembled Blu-ray boxed set and its S.H.I.E.L.D. case (pictured above, video after the break) with the sweet glowing Tesseract cube? Good - now forget it, at least until spring 2013. Blu-ray.com has an official statement from Disney that sadly informs us it will not make its predicted September 25th ship date, and has been pushed back. The statement does go on however, noting that buyers will receive a new briefcase with even more (unspecified -- may we suggest Tony Stark's Iron Man briefcase?) special features. It doesn't go into precisely why all this happened, but an earlier report from TheHDRoom noted a legal squabble between Marvel and Rimowa, the company that apparently created the metallic briefcase it was based on, and subsequently sued Marvel and Disney's home video arm, Buena Vista Home Entertainment for trademark infringement and the like. Whatever the cause, the set is on ice for now -- we'll let you know when it's safe to preorder again. 7
In this article: blu-ray, boxed set, BoxedSet, buena vista home entertainment, BuenaVistaHomeEntertainment, disney, hdpostcross, hdpostmini, marvel, Marvel Cinematic Universe Phase One Avengers Assembled Box Set, Marvel Cinematic Universe: Phase One, MarvelCinematicUniverse:PhaseOne, MarvelCinematicUniversePhaseOneAvengersAssembledBoxSet, minipost, tesseract, the avengers, TheAvengers, video
All products recommended by Engadget are selected by our editorial team, independent of our parent company. Some of our stories include affiliate links. If you buy something through one of these links, we may earn an affiliate commission.
Share
Tweet
Share