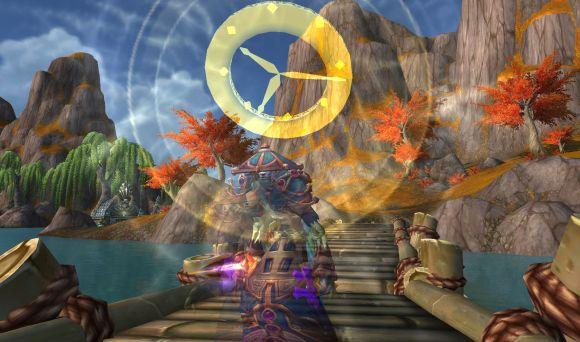 Every week, WoW Insider brings you Arcane Brilliance for arcane, fire and frost mages. This week, we take a break from pet battling to actually level our mages. Seriously. Put down that Armadillo Pup for a second and let's get to level 90. I'm talking to myself as much as you. I want you to know that.

I imagine I'm not the only slow-poke out there who's taking their sweet time getting to level 90. My playtime since the expansion hit has been almost non-existent until recently, and in fact I only just dinged max level this week. Still, even though time-constraints kept me from playing as much as I wanted to, it still felt like I was getting to 90 slower than I should have been. What can I say? I like to read the quest text, watch the cutscenes, listen to all the dialogue, explore the countryside. Oh, and I may have indulged in the occasional pet battle. We all have our vices. Though in this case, I'd hazard to say we all have the same vice.

But I did eventually get there, late or not. And for those of you who are still enjoying the journey rather than the destination, I've compiled a few of the thoughts and observations I had along the way into this week's column. For those of you for whom this advice comes too late, I'll start hitting the post-90 content next week. Pinkie swear.

I know none of these tips are going to be strictly necessary. The fact of this game is that if you play it long enough, you'll get to max level regardless of how you chose to play. But these tips are all things that I was glad I figured out along the way (or was told about by someone wiser than myself), and once I did, I found things that much easier, and my frustrations that much milder. My hope is at least some of you will find them helpful as you explore Pandaria with your mage.

Leveling is all about killing things as quickly as possible, and by and large, you won't be fighting much during solo play that'll be alive long enough to deploy the full might of your raiding rotation anyway. Adapt your rotation to a shorter, front-loaded affair, focusing on short cast spells and ignoring long casts or gradual DOT effects for the most part.

For arcane, that means lots of Arcane Missiles procs and Arcane Barrage pretty much every time it comes off cooldown. Arcane Blast should be used only as an opener (to apply Slow via the glyph), and as a filler spell between Arcane Barrages and to proc Arcane Missiles. Your mana should almost never drop in any noticable way while soloing as an arcane mage.

Fire mages will want to pull multiple enemies at once, as they are well equipped to deal with them. Lead off with your bomb spell (for leveling, I recommend Frost Bomb for all specs, which I will explain shortly), followed by a couple Fireballs to build up a solid Ignite effect, Pyroblast whenever it procs, then Combustion, then Inferno Blast. If you have taken Glyph of Fire Blast (and you should have) your Inferno Blast will spread all sorts of nastiness to just about everybody involved, and if anybody gets close, remember that Blizzard and Flamestrike don't break Frost Nova, so just freeze everybody in place, Blink away, and resume the barbecue.

Frost mages likewise are also skilled at dispatching groups. Don't hesitate to pull everybody around and then kite the whole group. Open with a Frost Bomb, then Blizzard everybody. Frost Nova or have your elemental Freeze them when they get too close, Blink away, repeat as necessary. For single targets, use Frostbolt as an opener and filler spell, cast Ice Lance whenever your have charges of Fingers of Frost up, fling out a Frostfire Bolt every time Brain Freeze procs, and feel free to fire out a Frozen Orb if you have one available.

The idea is to kill as many things as possible as quickly as possible, then group loot like a boss.

In my opinion, Ice Barrier is by far the most useful of the three level 30 talents while leveling. Do your best to have it up all the time, and feel free to refresh it mid-fight. Not only will it absorb an impressive amount of damage that would otherwise be striking your soft, fragile flesh, it also prevents any spell pushback from damage. I cannot overstate how useful this is.

For your armor spell, I recommend Frost Armor while leveling. Its DPS buff is to haste, and our focus is on killing things quickly, so that works for us. More importantly, its defensive effect is to slow movement, which will aid us in kiting and in keeping our flimsy mage bodies out of harm's way. Plus, it's immeasurably useful for those times when you're just trying to get from point A to point B and those pesky mobs won't stop stabbing you as you pass by.

Frost Bomb is, um, the bomb

This is my recommendation for your bomb talent choice. I love me some Living Bomb, I really do, but for leveling, I just feel like Frost Bomb is the better option. Living Bomb just takes too long to grant its full benefit, and most things are going to be dead long before the explosion happens. But with Frost Bomb, you can open with it, it does full damage in 5 seconds (reduced by haste), and when it explodes, it applies a 70% slow effect to everybody around. This combination of damage and makes it incredibly useful for leveling, no matter your spec.

Shatter is for everyone

Unless you're a long-time frost mage, this might take some getting used to, but we all have access to Shatter now. This means that every spell cast at a frozen target will have a double chance to crit, plus 50%. Now, if you're a frost mage, you're freezing everybody all the time, no problem. But even arcane and fire mages have a surprising number of freeze options available to them. Don't overlook the usefulness of this.

It took me three levels as an arcane mage before I started hitting things regularly with Frostjaw and then Deep Freeze, then just destroying them with crits before they ever reached me. I found it genuinely startling how effective this was. It almost felt like cheating. I almost felt a little bit bad for those poor helpless giant tigers, exploding into tiny shards of frozen tiger meat so far from their intended meal.

Frost Nova is also a ubiquitous option here, though it is easily broken.

Our tendency is naturally to gravitate toward any glyphs that will increase our damage, but the new glyph design isn't really geared toward providing us with many solid damage options. Instead, we get a lot of utility options, and for the purposes of leveling, this is a good thing. Some useful glyphs for leveling:

Mages gain exactly one spell when leveling from 85 to 90, and that spell is Alter Time. This is my main gripe with the revamped talent system. While I enjoy the freedom of choice it provides at max level, I feel like it has removed a lot of the sense of progression and improvement while leveling. There are just too many dry spots in the leveling process, where you'll gain a level and literally the only improvement in your character is more health and mana. I'd like to see a few more tiers added to the talent selection, quite frankly.

Now that I've got that out of my system, let's talk about Alter Time, which we all get at level 87. It's a pretty great spell, and we'll talk more about how to maximize its effectiveness in raiding environments at some later date. For the purposes of leveling, Alter Time functions in three overlapping ways:So what are your own tips for leveling a mage? Let's put our pointy-hatted heads together and help every mage get to 90. There are warlocks to kill, brethren. All hands on deck.

Every week, Arcane Brilliance teleports you inside the wonderful world of mages and then hurls a Fireball in your face. We have you covered for Mists of Pandaria info, including our recent mage talent spec guide, and our guide to glyphs. And be sure to check out our list of reasons to still love our mages after all these years.